I thought maybe I wouldn't go on about this constantly, but now I am reconsidering that. Maybe I will keep telling you here that we have moved, and how Clerkmanifesto is now:

Life is a Fountain

It's not a fountain?

That's a joke you might get better over at Life is a Fountain, which will have today's clerkmanifesto content, but with more pictures! Better computer radiation! And vastly higher resolution fonts! So head on over there.

As soon as I figure out how to send email newsletters from Life is a Fountain, and settle into a way of doing that regularly, Clerkmanifesto is likely to become just a sleepy backwater of my vast Internet Empire.

Of course learning how to send Newsletters from Life is a Fountain, refining its content, and packing it to the gills with baubles and snacks, is all having to wait in line, and for scraps of attention, behind my current obsession, image combining. This is where I take fictional characters and put them into my real life. These are very time consuming to do and can even occasionally overwhelm me. So sometimes I have to ask myself what makes them so compelling.

I think I have an answer.

They simply don't work out that well about 80 percent of the time. Also I can't really tell whether they do work out until they're done. So there's the gambler thing going on in it- the idea that this next one is really, this time going to finally, finally be fantastic. And as any gambler can tell you, once or twice a day it actually does come through. It is fantastic! There's something about getting Linus into the library I work at, sitting on a chair in just the right way, that is so utterly satisfying to me. It somehow makes the world feel more like my world. 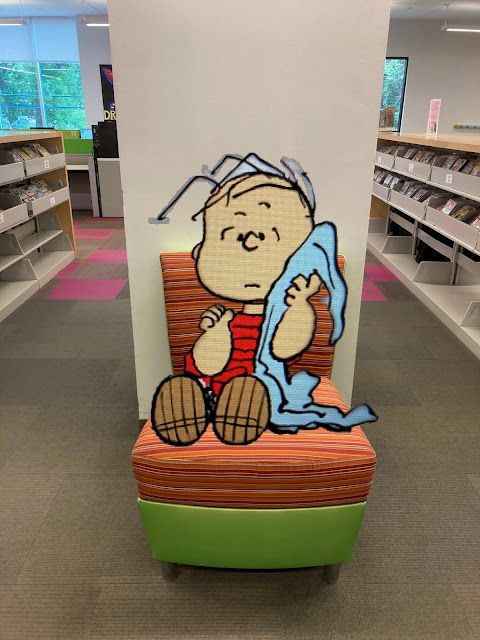 Also, new materials and ideas are everywhere! I work at a library! This afternoon I was shelving and came across a kind of picture book of The Fire Next Time. Immediately I had to do a mash-up with James Baldwin! I took some pictures of a couple of the more likely pictures of James Baldwin. I carefully masked out just James Baldwin. Then I started trying to match him with the increasingly large numbers (but never enough!) of pictures I now have of all our desks, seating areas, and counters at the library. It matched up okay, but I needed to do another layer to put in a computer wire that the masked cut out of Baldwin had blocked. But when it was all together, the black and white source picture of James Baldwin was a bit of an off match. So I applied a whole bunch of filters to try and bring it together, and...

It was okay. Not a great one. 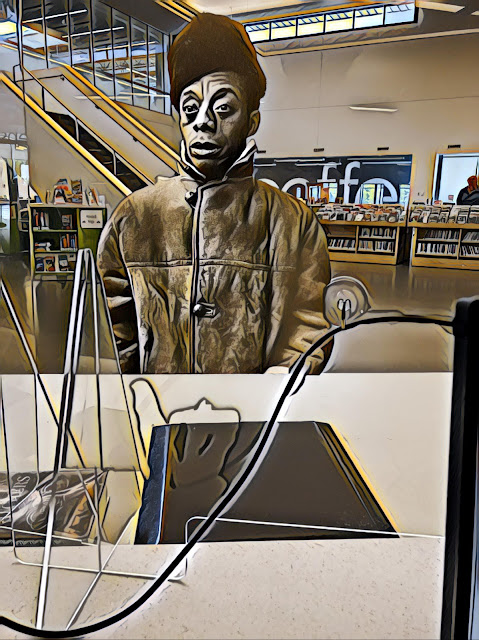 But maybe the next one will be amazing! 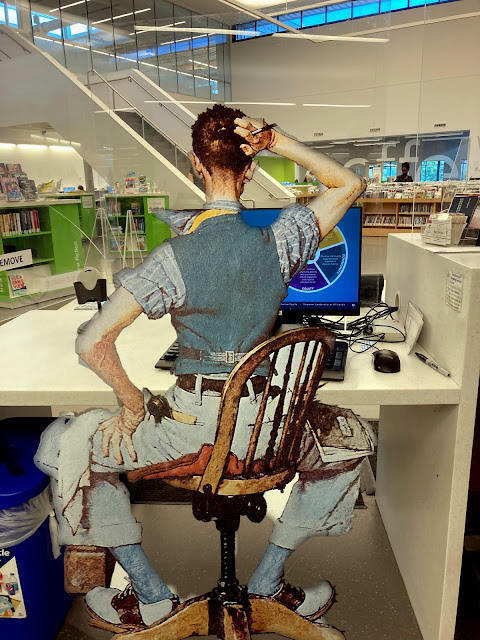