This picture story involves some of the harsh realities of the natural world IN ACTION. So, unfortunately, it is maybe not suitable for,

Anyone with a heart at all.


But we're sort of stuck with it all, so we should try and be Buddhist or something, I guess.

It all starts with this beetle, who is everywhere around town these days: 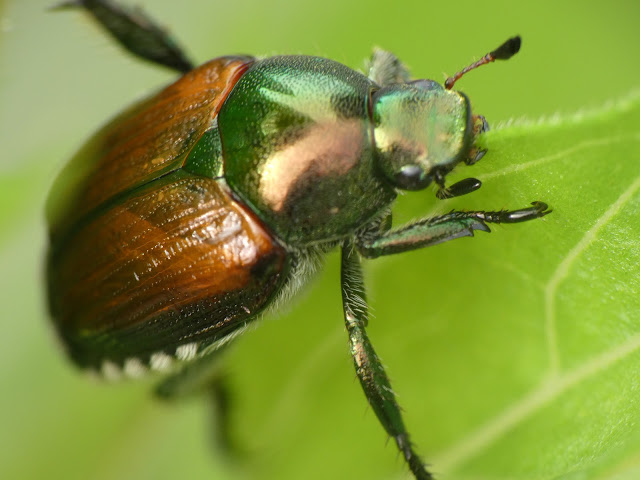 There was even one of these guys on the table between me and my wife a couple of hours ago!

Careful readers may notice that this is the same exact variety of beetle whose corpse I, er, borrowed, for a little Audobonesque photography a few days ago. To refresh your memory it's as seen here: 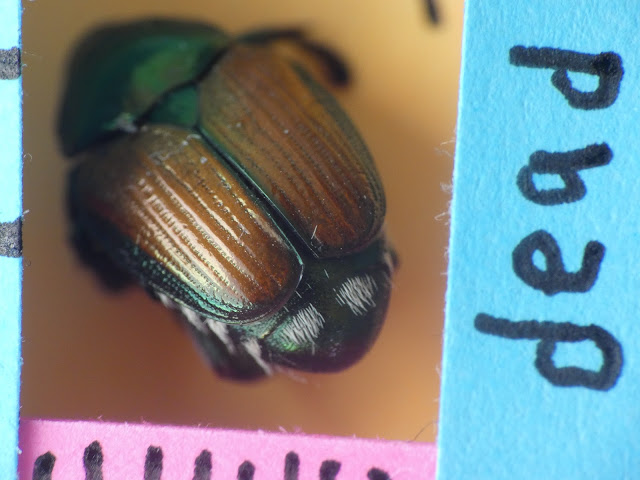 Now bear with me as we change gears for a bit.


Despite all my delightful ribbing of god for being a psychopathic asshole, I have always been a big fan of nature. I love nature!

It's pretty! And endlessly interesting. And intricate. And mercurial. And did I mention it being pretty?

So there's that, thank you very much.

But for all my interest and time in nature I've never been a great Naturalist.

I love the idea of being a Great Naturalist. I like reading books by great naturalists. I love to look at nature and to spend time out in it as long as there aren't too many mosquitoes, or rain, or hot weather, or ticks, or angry bears, or spiders, or wind, or freezing nights, or sunshine. But minutely observing just exactly what's going on in the natural world takes a fair bit of discipline. And notes. And stillness. And attention. And patience.

So I find it way easier to take a good and enjoyable look at the world around me and then sort of deduce, or make up what's going on.

Making up what's going on does not mean it's not right!

But I accept that it's not terribly scientific. It's not being a Naturalist.

But then something happened.

I started taking pictures all the time with my super zoom lens and my super close up lens.

I'm not saying this made me into a Naturalist. But this endeavor, and my camera, has been revealing to me a kind of detail of the natural world around me that I've never had the commitment, skill, and luck to see before.

I mean, I liked flowers, sometimes a lot, they're colorful and extraordinarily beautiful. They smell great. They're hopeful!


But I never really understood before that they looked like this: 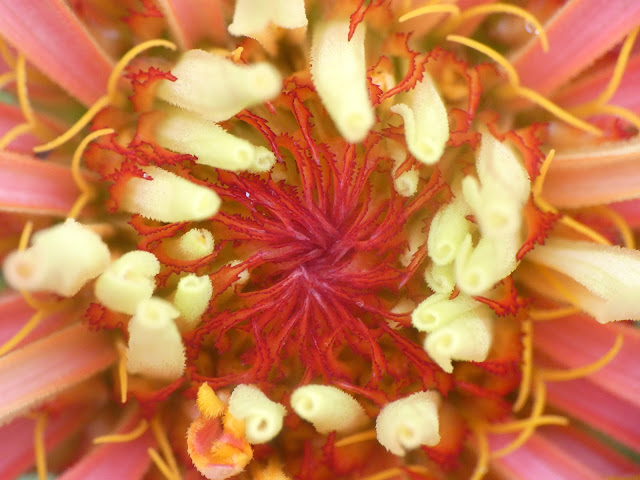 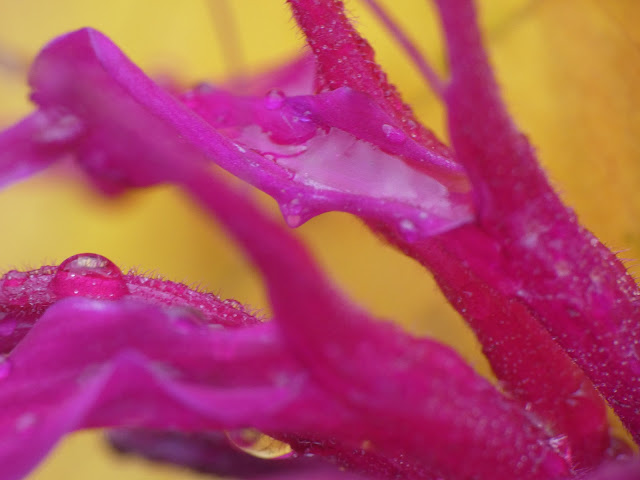 Yes, I probably could have guessed at their being something like it, but that's not the same as having my soul rocked by it. A rocked soul stands aside from the rational mind. It's more like a spice.


Another good example of this new, almost Naturalist vision is with the Robins. I've been looking at Robins with some pleasure for my whole life. I've also known from all the storybooks and proverbs about how Robins really like worms. That's nice. But until recently, until I stared into my zoom and followed Robins around for minutes at a time (very Naturalist type behavior), I never saw the Robins actually eating these said worms.


Now I see it all the time! 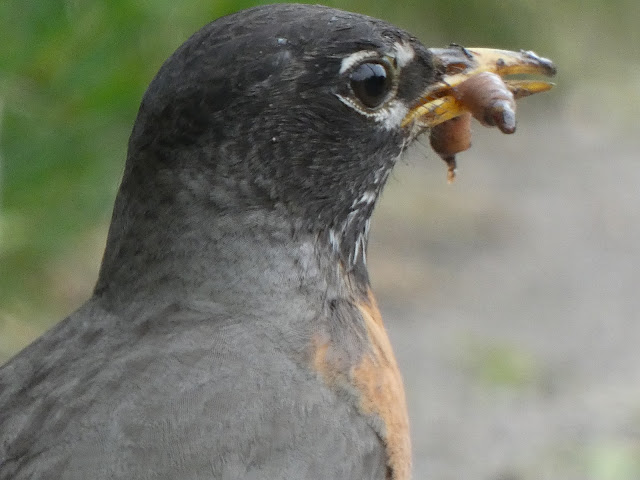 Maybe even a little too much, if you know what I mean.

Today I witnessed a special nature event. It was very exciting. I have seen nature events before, naturally enough: a giant flock of geese, a Golden Eagle catching a fish in the Mountains, deer in a lightning storm, a massive bloom of poppies, you know the kind of thing. But this one was a little smaller. I'm not sure I would've noticed if I weren't taking my photos.

Now let's go back to that beetle.


I found some more. And since I'm not likely to say no to trying to get just the right shot of their iridescent green heads as they wander across flowers I was taking some pictures. 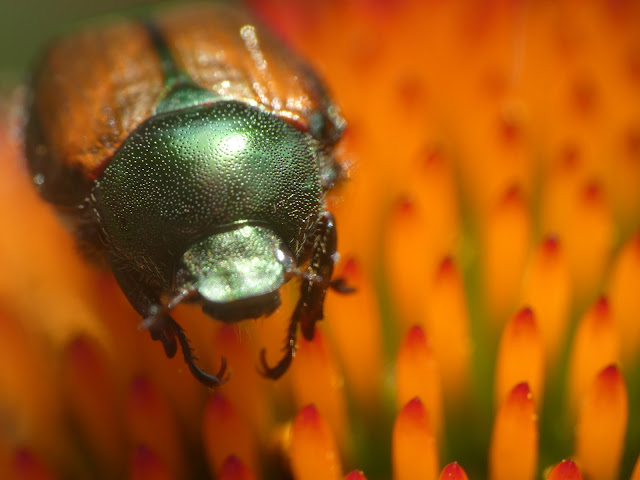 And then all of a sudden there were birds everywhere!

It was the nature event!

And it wasn't Robins, who I have lots of pictures of, or sparrows, who I have a few pictures of but they're not very colorful. It was three varieties of birds that aren't uncommon, but that are shy enough, and uncommon enough, that I haven't been able to get pictures of them. They tend to prefer the deeper foliage of trees, and so far all the ones I've seen dart about constantly.

These weren't really different in that sense. They were very active. I didn't get a picture at all of the woodpecker. But because there were several blue jays I was actually able to get an only a little bit blurry and not quite close enough picture of one. 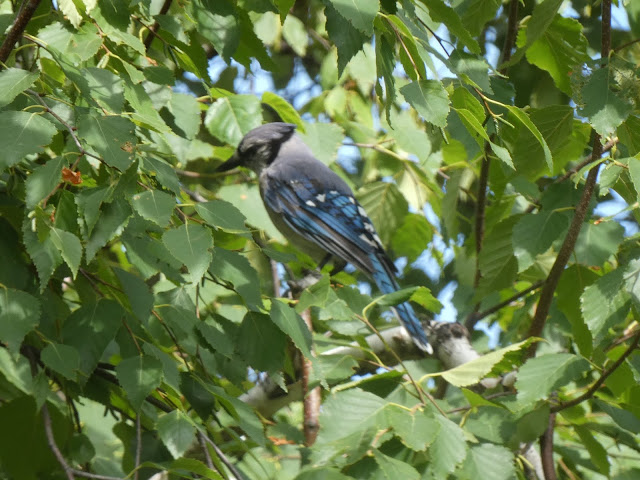 But most of the birds jumping around the tree were this yellowish one. I think it's an American Goldfinch. There were at least a dozen of them hopping busily around. I've never seen so many before. It was pretty exciting. 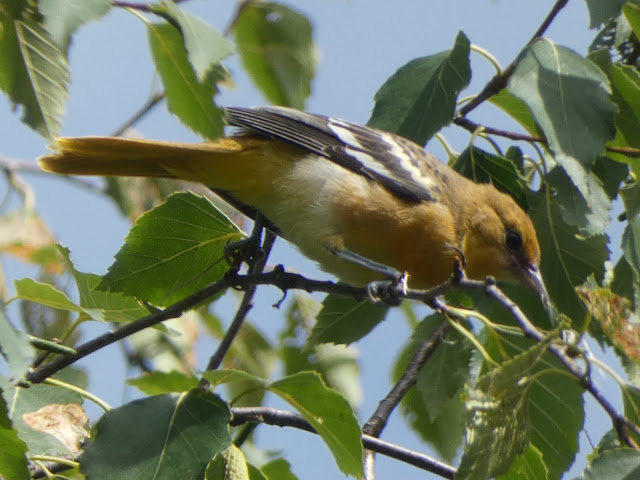 I took as many pictures as I could, knowing I would be lucky if one or two turned out, and eventually all the birds left and I went on my way too.

Naturally I wondered what all the excitement was in the tree. And I had my surmise that it was some small feeding event, but that's just guesswork, the work of the old me who wasn't a Naturalist, as opposed to the new me who is almost a Naturalist.

But all wasn't revealed until I went home and looked through my photos.

I came across a decent action pic of the (maybe it's an) American Goldfinch. He (she?) was eating just like I guessed. 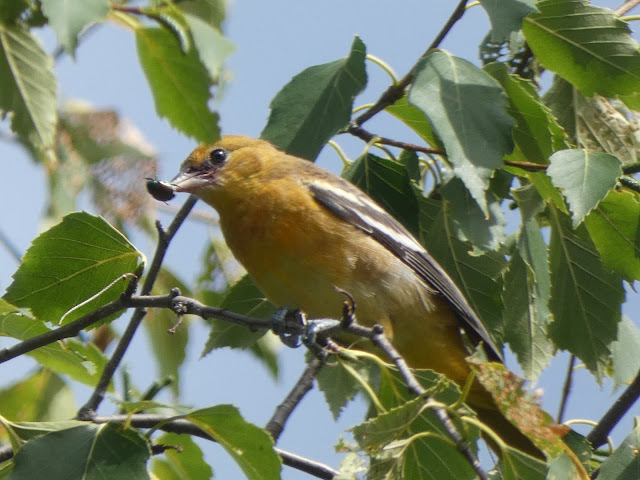