We start with a picture: 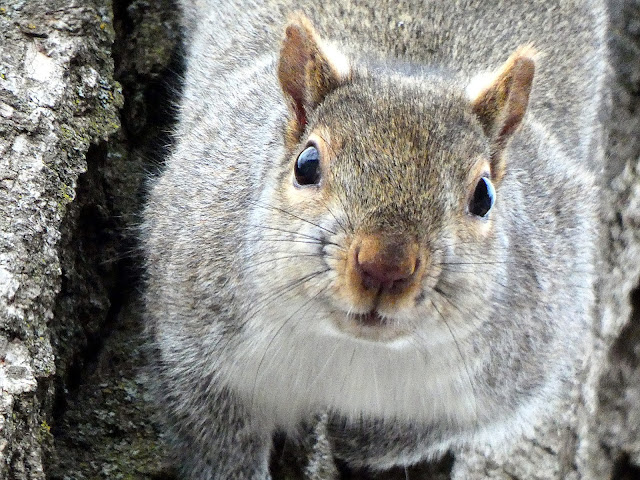 I recently read an article about how in the 1800's squirrels were a popular pet. But they were also pets before and after that century. Did you know that both Warren Harding and Harry Truman had pet squirrels at the White House, and they were both named Pete! Pete the pet squirrel.

Do you see that picture of a squirrel we started with? I was busy taking pictures of bark during a short, misguided period awhile back where I was thinking of turning clerkmanifesto into a "Bark" Blog. This would be a blog that strictly showed pictures of tree bark. I was sure it would be my avenue to fame and riches, although in retrospect I can't for the life of me see why I thought that. Anyway, I was taking bark pictures and this squirrel showed up.

He, and let's call him "Pete" (why not?), gave me a good, inquisitive, and not unfriendly look. A long, charming look.

So I took Pete's picture.

It was, I'll admit, more fun than taking pictures of the bark.

I got the picture home and looked at it on the brilliant color and resolution of my computer screen, just as you may be viewing it now, and I thought:

"I could see having a squirrel pet!"

I mean, if my family were to get a pet we would definitely go cat.

But look at this guy! Just look at him!

Squirrel would easily be the second choice.

Although your rodent mileage may vary.