I don't know where to start.

And I don't know what picture to use.

How about if I talk for a bit, and then I ask a small favor?

This has been a long Winter. It has been so long a Winter that I'm pretty sure I've already written several times about what a long Winter it is. And then the Winter just kept going on!

I know it will end, but I've had a hard time this Winter. There is no grand theme to this hard time, and it is not the main subject for me today to try and explain. But if you'd like to know about it in detail, simply go back through the last three months of posts and

read between the lines.

And so, in this long Winter, when I step out to photograph, and it's one degree out, and the skies are flat gray, and the snow is both fresh and ancient and interspersed with layers of ice, I don't really believe there will be anything for me to photograph.

I keep my camera tucked in my coat, like a pet mouse.

And it isn't a good picture at all. But as soon as I take a picture of it a flock of unicorns, or something like that, goes running by to my left.

"That's probably worth taking some pictures of." I say.

Today I went to the river.

Exactly as I described I had no hope and a surety at the same time.

I can't explain it. Look into your heart. You will know the very thing I mean. That is life.

Here is my favor to ask:

The "Unicorns" I saw today was a waterfall of ice.

I'd like to show you pictures of it, but I just want to show you one picture of it so you know what it is.

Here then, is the fall: 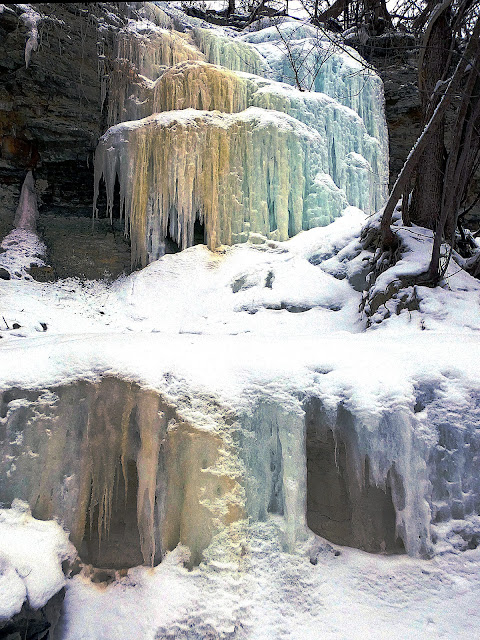