Here is one last memory from West Pine Creek before we climbed out of that magical, deep, and narrow slot of stone and winded our way up into the low Russet Mountains with its long, tangled meadows and fragrant woods.

The deep canyon of the creek was starting to open out and we were spending less time trudging in the water. As the canyon eased up, trails formed, and everything became less demanding and less spectacular. But then, in one final burst of quintessential West Pine Creek Canyon, two walls closed in for one last time. A long, deep emerald pool, glowing as with an interior light of its own, filled the canyon below a tumbling fall. And a final trip across the water was required. It had been so many miles since we encountered one of these pools that we had deflated our donut, so we brought it out and blew it up again. I piled as high on top of it as I could, hoping to preserve whatever hard won dryness I had coaxed back into my backpack. After a couple of wobbles and splashes, I made it across the surface of the pool. I set my pack on the rocks by the falls and flung the life preserver like a frisbee across to Oliver. He was just able to reach it.

Oliver too tried desperately to keep his pack out of the water. Perhaps he tried too hard. He balanced way up above our little flotation device and then he gingerly kicked off. Teetering on and tapping at the water he made it about halfway across, and then, in the blink of an eye, he flipped.

There was a tremendous splash. The donut bounded on the surface of the water. Then a backpack, puffed up in plastic bags, floated heavily to the surface. The water calmed, but Oliver did not appear.

Oliver did not appear!

But the water was only three or four feet deep, so I wasn't much worried, and I could see a lot of movement under the surface.

Suddenly Oliver burst out of the water. He was holding, squirming in his arms, some kind of prehistoric fish more than half his size.

I looked admiringly at the monster fish. Reflecting though upon Oliver's much discussed vegetarianism I wistfully commented "If only it were that size but a parsnip."

Oliver just grinned wildly, then carefully set the fish back in the water where it bolted away. "I hope it doesn't eat my pack." He said, then waded over to the half floating bag and sloshed wetly with it and our insufficient donut to where I was at the falls.

And that was it for West Pine Creek, sort of. For several miles the trail worked along the creek, but now that creek was just a pretty feature of the landscape, no longer hemmed in and an entire world unto itself. We celebrated that night with a big fire- we were already among much mixed oak and pine- and by feasting on a rich stew that Oliver brewed up, full of sage and wild onions and mushrooms he had foraged, along with the usual carrots and sweet potatoes and rutabagas and such. It felt good to eat a thick bowl of hot food by a fire. We were getting better at drying all our wet things on makeshift frames by the flames as well.

We climbed all of the next day. The path was good if a little overgrown. Though I had been backpacking for well over a week I still wasn't up to the kind of fitness I probably should have started the trip with. Oliver, light and quick and full of energy, would bound out ahead of me. I would plod towards him, breathing heavily, and then when I reached him at the top of some pretty crest and threw my pack down, he would gather up his own pack and say "Ready to move on?"

"No." Was invariably my answer. I needed water, which I drank as slowly as I possibly could, while Oliver, having long enjoyed the view, bounced eagerly as he waited for us to be on our way.

Repeat that scenario a hundred times and we made our way deep into the mountains. The woods grew thick and we even saw a few patches of last-to-melt snow from the Winter. The scenery was unspectacular again- no high alpine wonderland are the Russet Mountains- more like over-sized rolling hills covered thickly in second growth forest. Creeks were the best part of it for me, as I love running water, but the trail usually crossed them and almost never followed them. Other than that it was the endless pleasant trees, and the quite glens between.

But there was one day when I was wearily climbing yet another rise through the long forest and was surprised to see Oliver standing at the top of the rise there. We were nowhere near due any rest, and I was starting to get more fit anyway. As I approached him and started to speak to inquire he held his finger to his lips. I headed up and looked out.

There was a huge open area down below, a meadow. It was dotted with ponds and a clear little stream. The whole of the field was absolutely covered in blue flowers- a sea of blue flowers, an ocean of blue flowers, set in the richest green of grasses- a million flowers like technicolor stars in the day. And then, wandering among it all, browsing contentedly, there had to be more than 70 elk. 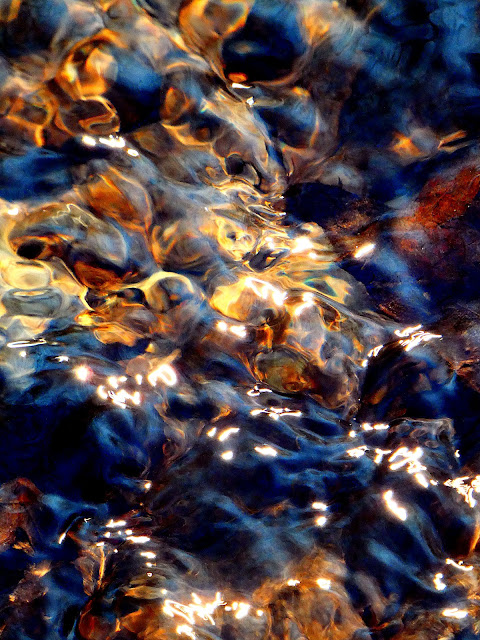