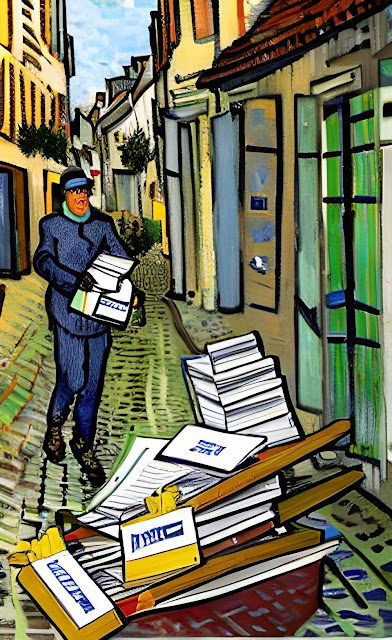 From Nice, France, I mailed postcards. And if, weeks later, you still haven't gotten yours yet, blame the French. Or maybe the Americans. Or probably both.

At 25 cents to deliver a postcard I think I could tolerate a couple weeks for the long journey. But my stamps, to mail a clearly addressed, small, conventionally sized bit of mere card stock was nearly two euros per postcard!

I have seen an extremely modest sized box hold 5,000 postcards. So that computes roughly to nine thousand Euros to deliver a small box to America, which should cover a fairly alert service.

Here's how I picture it should go:

The mail to you, a super charming postcard, is picked up on day one from the yellow box I put it in. This card is very simply and clearly to another country as it is deposited in an International Mail slot, so it should quickly go off to one of five or ten or twenty main national mail distributors for that. This requires no sorting to what should be a large hub possibly in or near where I'm sending the mail, but surely less than half a day truck or train ride away.

On day two, in the first extremely simple sort, your postcard is sorted to its country. The U.S.A. is easily large enough to support tons of standard mail traffic and needs no further sorting, nor waiting to have enough to fill a box (9,000 euros!), or plane, or whatever they want to fill before sending it on.

These rates will clearly support plane cargo across the Atlantic, actually all international mail is sent by plane, and on day three, at a minimum your postcard should be dumped into the U.S. system.

From there I think our postal system should be able to meet a two day delivery. That's actually required by international mail delivery rules.

So you should have gotten your postcard eleven days ago!

Which begs the question: Where is it?

I think a French Postal Carrier is admiring it right now at a charming French café.

And who can blame them? 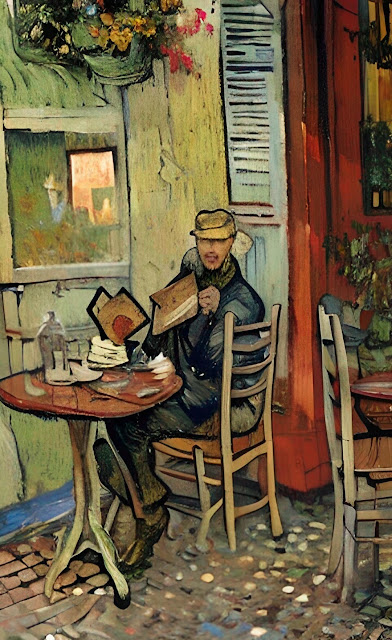