At press time all 32 World Cup teams have played one game. I watched part or all of every single game! This took five days, during which I held my peace out of respect for the world's general lack of interest in what I have to say about the World Cup.

BUT NOW THE DAMN BURSTS!

Who is looking good indeed:

Who is looking like everyone else in this tournament:

Next, what are my particular takes:

All underdog teams that I want to win, who don't win but almost win, irritate me to a quiet fury. I'm at looking at you Ghana and Canada.

The fact that the majority of fouls, ones that are actually called and considered fouls, are nevertheless functionally permitted and carry no real punishment is possibly the worst rule in all of sports.

I may be incapable of being a "neutral". If I genuinely don't prefer that one team beat another then I tend to find myself actively rooting for a draw. I have a hard time letting fate be.

My favorite game so far:

Spain 7, Costa Rica 0. This is not because I wanted Spain to win (I did). Or because I hate Costa Rica (I don't and hope they do far better in their next two games). Or because of the drama (Argentina Saudi Arabia, Germany Japan, and Portugal Ghana were dramatic, not this game). But rather I loved this game because Spain played such pretty football. And what I like, is pretty football.

My unsound and eeyorish predictions from this point on (may they be cursed):

Argentina will not get out of their group.

Portugal and Belgium will play horribly and continue to win a lot.

Spain will be brilliant until one somewhat early day when they just can't score, and it will all be over.

Pragmatism will triumph over joy. Or...

France or England will win and actually deserve it!

It is easy to predict this year's winner. Even my AI image producer on my phone can do it! Here is the team my AI has predicted will win the World Cup: 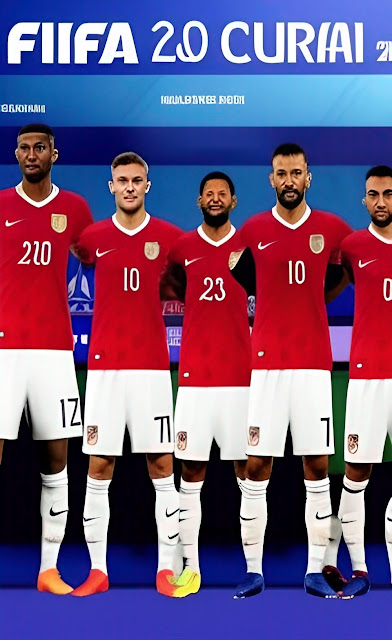 I think this might be Switzerland? Very boring, but remotely possible. Though how they managed it while fielding two number 10's, and a number 210, is at least going to be an interesting story.