That which we do not discuss today

I am regularly driven by compelling interests. But alas these are not interests like, I don't know, Yo Yo Ma's interest in a cello. These are more like Karl Schwartzberger's interest in the best mustard.

On April the seventh, 2002, Karl Schwartzberger woke up wondering what the best mustard was. He went to the store and bought every mustard they had. Then he travelled around to seven other grocery stores and fine specialty stores buying mustards.

He assembled an astonishing 34 mustards, everyone he could find in his well stocked city, on a large table in his kitchen.

He also had some breads and sausages to test the mustards in interactive settings.

After exhaustive tasting, including blind taste tests, his favorite two mustards were clearly Amora Mustard, from Dijon, and Dusseldorf Mostert, also known as ABB mustard, and immortalized by Van Gogh in his painting Still Life with Bottles and Ceramics (pictured below). There was too little between the excellence of these mustards to pick one over the other. 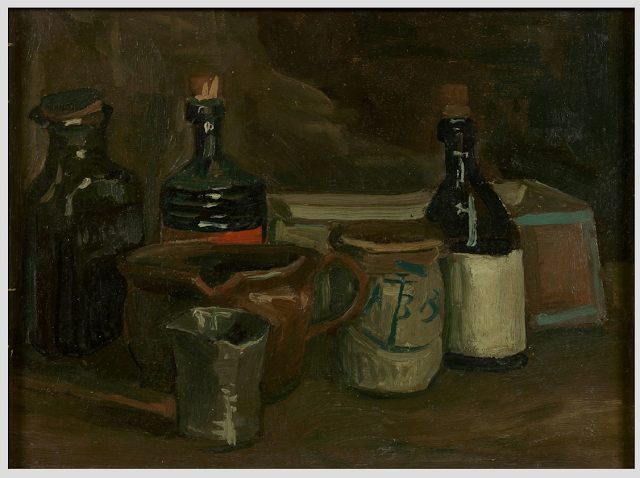 Karl was extremely satisfied with the quality of his two picks, but he was nevertheless aware that, as products, they perhaps might lack the vibrancy of a more freshly ground mustard.

What, he wondered, if there was better mustard.

Into the long, early Spring evening Karl feverishly researched the making of mustard, the nature of brown vs yellow vs. black mustard seeds, and the primacy of steeping seeds in cold water. He learned about the second soaking and about verjus, vinegars, and even lemon juice. He dabbled briefly in thoughts of turmeric, and then strongly rejected it. And he slowly became devoted to the work of the mustard theorist Tomas Cabernet and a devotee of the pure ingredient process.

Late that night, aye, almost as the sun rose again Karl fell asleep running over plans for the next morning. On April the eighth he would attempt to make his own, perfected mustard.

Early in the afternoon of the next day Karl Schwartzberger woke up. He got out of bed. He made some toast and had some tea. He munched the toast as he read the daily paper. He fed the cat. He sat on the couch and read a chapter of an interesting book he was reading about music theory. He got up and stretched, and he looked out the window at some pigeons whereupon suddenly he remembered about the mustard.

And all at once, in an overwhelming wave, it all seemed really pointless to make mustard, tiresome, perhaps difficult, and that he had enough jarred mustard to last him a lifetime anyway. Probably.

He wasn't that sure he really ate all that much mustard.

The truth is that he had lost interest.

And so have I.

But it was pretty fun while it lasted.