What day number are we on?: Four!


Level of writer's drunkenness (in real life, scale of 1-10): One, but after this I'm getting another Lemoncello to assuage my feelings of hopelessness that I well ever get anywhere on this overly ambitious project.


What am I eating (in real life again)?: Starting to feel stirrings of hunger.


Map or picture?: Outside front door, to right. Better in person, but note how much you already enjoy the ivy. 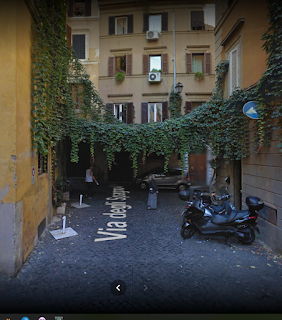 Any other notes/Status: Am freaking out a little. When I finished this I accidentally posted it live, which would have been confusing if you saw it. It is the first of many mistakes I am anticipating.

We are in Rome.

And if you will excuse both the blunt language and blunt sentiment: Fuck everywhere else in the world.

Last we left off I was beside myself with exhaustion. But we did sleep. This morning we got a train to Rome (from Milan). The train was a little less fun than I anticipated until they gave me Champagne. Also the seats, which were by no means huge, were 7 times larger than on the airplanes. So there's that. The window was fun, sometimes. It's not like Italy isn't ugly occasionally, but man, not often. And catching glimpses 200, 500, 1000, 2000 years into the past is pretty diverting.

We had more problems getting our apartment, but it's ours now. I had a first gelato at Grom. It was, like, okay. It's possible if one reads too much about things one becomes a bit addled. I look forward to becoming a human here.