Level of writer's drunkenness (in real life, scale of 1-10): We'll be generous and say three, I'll go get another shot of lemoncello and see if we can break the three barrier, okay?

What am I eating (in real life again)?: Nope. Nothing at the moment

Map or picture?: These are little lamb chops, or perhaps just lamb chops. 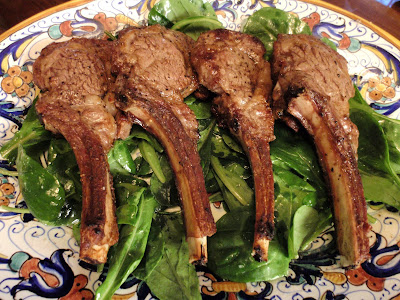 Any other notes/Status: I just wanted to say hi, and how nice it would be if you left a comment on my blog, because it suddenly struck me that I will return after five weeks and be like, "Hey, I wonder if anyone left a comment from like, practically a month and a half" and then I'll be like "I wonder if anyone enjoyed my fake travelogue which turned out to be uncannily accurate?" And then I'll see only two comments and I'll feel a little sad, but I'll try not to feel sad and reassure myself how much me and Van Gogh and Kafka have in common, but in a good way.

We went boating! Yes, boating. Perhaps my bike riding stimulated my wife's desire to rent a rowboat in what is, really, a pond, in the Villa Borghese (big park at edge of Centro Storico). We rowed in the pond, called, actually I'm not sure it has a name. The sky was blue. We didn't do it for very long, but it was like being in a movie. There was even a fake ruin on the shore. That's kind of hilarious, to have a fake ruin in Rome. You do realize you're Rome? That's like putting up a fake McDonalds in Louisville, Kentucky. You can get the real thing next door.

Later we went to a real live restaurant, which we have not much done due to some specific food needs between the two of us, and we had abbacchio scottaditto. My understanding is that "scottaditto" means "burnt fingers", which is to say the these wee lamb chops are so hot and good that you burn your fingers to eat them. They were that good! Just like the name!

What's that? You want to know where we got them?

Oh, you're going to Rome too?

Okay, good for you! Well done! Did you know that going to Rome is one of the 200 Cardinal Virtues? So, we got them at Osteria Del Sostegno. You don't know it? Very close to our apartment, right over on Via Delle Colonelle, 5. Tell them clerkmanifesto sent you, and they will look at you like you are vaguely deranged.