Hundred greatest artworks: Deposition from the Cross by Pontormo, Part 2

In part one yesterday, we explained with a reductive, marginally accurate simplicity, that the Renaissance was an elegant, spiritual, and intellectual harmony played out in the perfecting of the illusion of "the real" in art. This led inevitably to the Baroque Period, which applied this naturalism to the recognizable, authentic world we live in, with all its gritty passions smeared out in front of us. And, ridiculously perhaps, I compared these two art periods to an Oreo Cookie. These, sequentially, were the two chocolate cookies one after the other, divided in time by the cream; which, in this case, is Mannerism.

And then I left you to muse upon this emblematic Mannerist painting, Madonna with the Long Neck by Parmigianino. 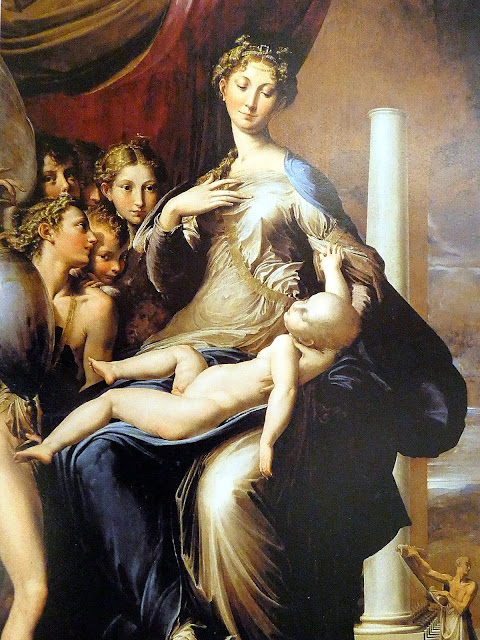 What the hell is this?

And most of all, what is Mannerism?

Finally we will answer this question.

So picture this. The artistic culture of your highly religious world has spent hundreds and hundreds of years perfecting painting and sculpture. They've even gotten science and math involved to figure out how to make things look three dimensional and like they recede into space (by the power of perspective!). They've dug up old statues to figure out how to sculpt better (like they used to be able to do 1,500 years ago). They've even been sneaking into the graveyards to dig up bodies and cut them up to learn anatomy so they can render humans more perfectly. It's crazy.

But finally they do it! By the time they've gotten to Leonardo, Botticelli, Raphael, and Michelangelo, the best of the local artists are crafting luminous, accurate, inspired visions of reality. Pictures no longer feel like holy iconic symbols or representations, rather they often they feel like windows into other worlds.

It's amazing. Indeed it's magic. Finally, finally they have captured reality itself!

What do you do when you've perfected representation?

Again, what do you do when you've perfected representation?

You mess with it. 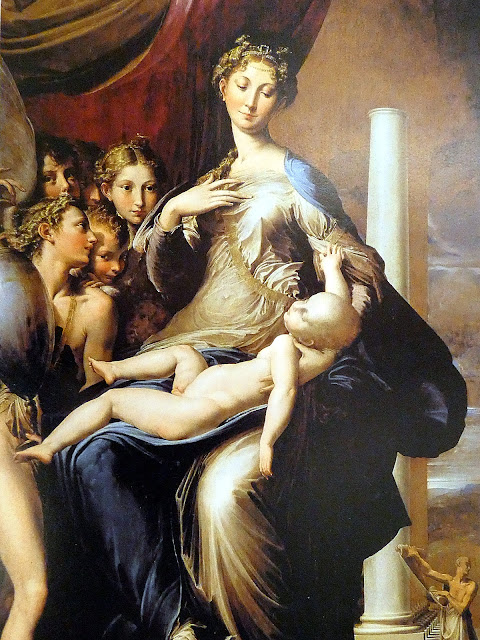 Look at that Madonna up above again! She is nine feet tall! So I guess it makes sense that any baby she has is as bizarre and as long as any of the admiring (actually they mostly look like they just want to be in the picture) crowd is tall. A tiny man recedes a thousand yards in the distance in the lower right, with a giant column... because! A mysterious leg appears from out of nowhere in the bottom left. And the curves, oh the curves! The baby swoops along, foot to head, his arm continuing the serpentine line along his mothers arm, curving down her finger and other arm, or inclining up and up and into her swan's neck and head, all elegant display and sinuousness.

Delicious, no? The regular rules need no longer apply. Laps don't need to hold babies. Sitting people don't need to be able to stand up. The artists have already mastered reality. They are now on to pursue something greater. They are free to seek a perfection of manner. The soul of form. They cast for essential geometries and incandescent lines. Far away and close up. Colors and darkness. Old and new all at once. Reality is theirs now!

I mostly blame Michelangelo for this. The Pieta is just so... bloody... good.

The Pieta being good: 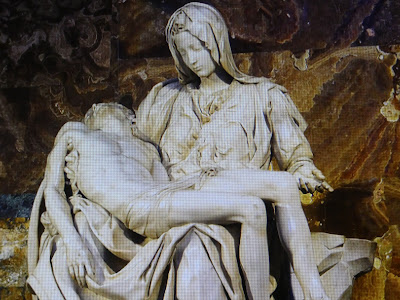 Sometimes geniuses are just so geniusy that they get a little wild with it. Michelangelo was 25 when he made the Pieta.

Just a hand from the David: 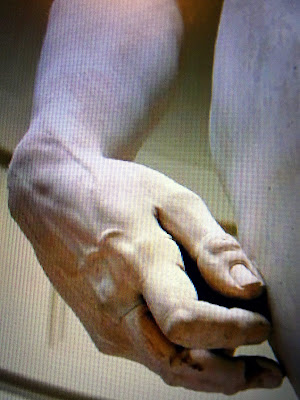 What, are you gonna sing the same damn song for the rest of your life? Our Renaissance cookie is now perfect and done and round. Enough already! What about some cream? 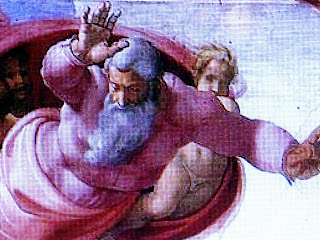 Once you have carved the face of God you might as well move on and try and get fancy with it. You know, have a little geniusy fun.

Eh, it's all gravy, pink and purple gravy.

And so at 33 Michelangelo goes off and paints the Sistine Chapel. It is full of unreal, electric pastel colors, 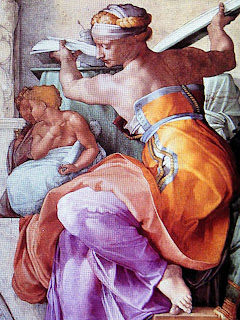 and writhing forms in strange but evocative poses. 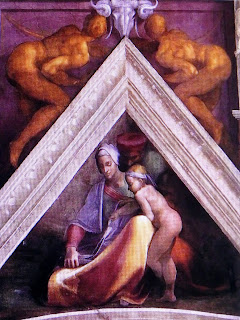 It's all a little irresistible. Who wouldn't follow this explosive reinvention, even if it is a tad loony?

Do you, great artist, seriously want to pump out yet another Madonna with the child and the baby John the Baptist, all blah blah blah- super accurate again, in beautiful, harmonious triangles with solid anatomy and halos?

So mix up that pink paint. Now the orange and turquoise! Practice your swirling spiral lines. Find a twisting and exotic pose. We can improve on reality now that we have mastered it! It is our duty to God! 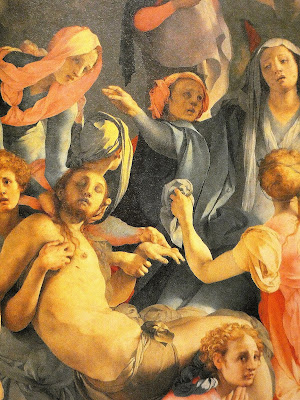 The Deposition from the Cross, by Pontormo.