I am not good at humility.

I sometimes wish I was. And I suppose it is still possible for me to get better at it. If I try really hard. But it doesn't come naturally to me. Which is why it can be such a delightful surprise to me that I am capable of taking so much joy in the foibles and limitations of my nature photography.

Sometimes I am comically bad at it.

Today was an excellent example.

Prepare for some not very good pictures.

I was out for my morning photography walk today. As is common in this late Fall, early Winter season I was finding very little to photograph. But it was a clear day with good light and no wind, not unbearably cold, and things were starting to pick up on the photography front. I'd gotten to a section of the street with a lot of birds and squirrels.

There were Cardinals even.

Cardinals are great because they're red and pretty. Also they are not uncommon.

Unfortunately Cardinals are not that great because they move around incessantly, and they like to keep plenty of tree between themselves and anyone else, like, for instance, a neighborhood photographer who only innocently wants a few pictures of the Cardinals. But the Cardinals don't like anyone to get close at all!

This makes them hard to photograph.

I have taken hundreds of pictures of Cardinals this year and only have a few good ones. I've showed them to you before, twice. But I was taking pictures of these Cardinals because with photography you never know.There is always room for more good pictures.

It was clear though that things were not going well.

Here is my last shot of a Cardinal before they departed the scene: 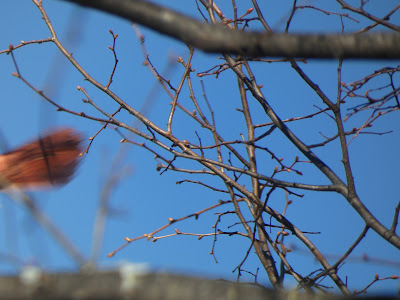 Yes, that's him on the left!
Yes, it was my best shot.
Since I was already looking up in the trees at this point I decided to turn my attention to a local squirrel. I like squirrels and they're pretty easy to photograph. I have a ton of nice photographs of squirrels, but it never hurts to have another.
But this wasn't working out that well either. The squirrel wasn't situated well for me. This is how the squirrel was situated: 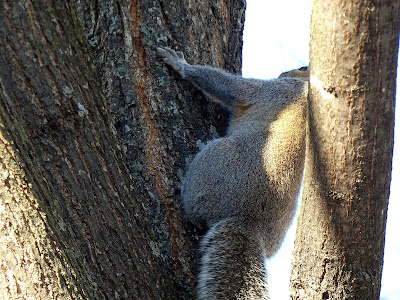 I mean, it's better than that Cardinal picture.

But as I was taking this picture I had that hunter's sense that something was happening on the street to my left. So I looked over and a Coyote was ambling by.

He was walking by in a way that suggested I could have taken dozens of astonishing pictures that would have been incredible and would have dazzled you and would have finally made my blog super famous!

Only I had been too busy taking very bad pictures of Cardinals and a squirrel.

I sprang into action nevertheless and took pictures of the Coyote's butt. 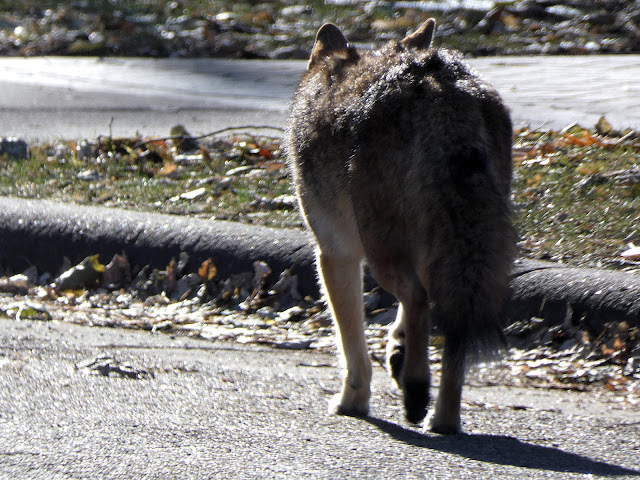 Oh, I followed after him and took some more unsatisfactory pictures before he disappeared off towards the river.

Then I laughed. It was still pretty great.