The incomplete ascent of Minnehaha Creek

Today I went on a bike ride, but this isn't the sort of post where I tell you all about it and show you a hundred pictures.

I found myself heading upstream along Minnehaha Creek. I love this creek. It runs down through all of Southwest Saint Minneapolis. It goes over a famous falls shortly before coming to the Mississippi River.

It's famous because a poet wrote:

Hear a roaring and a rushing,

Hear the Falls of Minnehaha

Calling to me from a distance!"

And this poem (there's more than what I included) went super viral in 1885.

People were into different stuff in the olden days is the only way I can explain it. Like, for instance, the favorite food back then was turtles! I never ate a turtle. And I hardly ever read long narrative poems either. I might like both, but when

You only have a few minutes?

Sure. So I was biking up Minnehaha Creek, above the Falls. And I thought "This creek runs all the way up to Dan's house!"

Dan is a person I work with at the library, and sometimes I write about him here because he is on the super short list of co-workers I am allowed to discuss by name. Though I have known Dan for 15 or so years, finding him terribly annoying for the first five, and oddly endearing the last ten, I have never seen him outside of the library or off the library grounds. I thought "If I make it all the way up to his house I will call him on my phone and say 'I am outside'."

I don't know why. The idea just appealed to me. And for reasons related to bird identification I have Dan's number. Although I was only vaguely aware of where his house was.

So I kept biking up the creek towards Dan's house, which is pretty ritzy, but not really his, but that's a whole long story and I know you're in a hurry. His house is like practically next door though to Charles Schulz's old house, which is an anecdote I can't resist no matter how frantic everyone's life is around here, what with the stuff you have to get to and all that stuff with your big hurry which is fine and I totally understand. I get super busy too sometimes!

I came to a bridge. I got off my bike. Up the creek was a fabulous blue heron.

I spent the next hour following it around and taking hundreds of pictures of it.

I'll show you just one of them, okay? At the end.

But it was a super nice time with that heron.

My Grandmother on my Father's side's maiden name was Heron. Though maybe it was spelled differently.

Yes, this is another of those anecdotes I couldn't resist.

So anyway, hanging out with a heron is what I did instead of maybe, but probably not, surprising Dan. 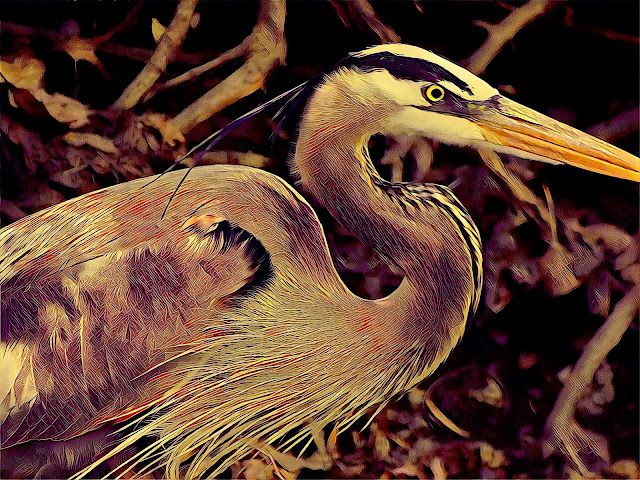