Chapter Eight: To the Shadow of Death

Chapter Eight: To the Shadow of Death

Not like “Clever appreciators of the natural world admire its subtle beauty” beautiful, more like “Let's put this sucker on a postcard” beautiful. I'm not complaining. Well, I probably will complain. There were things to complain about. But the canyon being lovely and interesting and amazing wasn't one of them. It was full of broken, sometimes towering pale umber stone walls, little oasis-like glens of delicate trees (rarely pines, despite the name), rich groves of grasses, and a merry creek full of clear and luminous green water tumbling over picturesque little rocky falls into deep pools swarming with tiny fish that against all the odds were adorable.

I descended into the canyon on a steep, rough trail that was easy to lose. This was a new challenge after the first 60 miles of a simple, converted jeep track trail. Here there were rocks that gave way under one, loose sand, uneven steps, and times where staying on the trail meant going the opposite direction of where one might ultimately be going. All the downhill pounding magnified the little problems of my pack, my boots, my blisters, and whatever uneven balances I thought I'd learned to put up with.

There were also people here. And people were nerve-wracking.

The first section of my trip headed resolutely across a swath of BLM land, a trail to nowhere for most people. But now I was connected up with a trail heading out of a parking lot no more than a few miles away from me, heading into a fairytale wilderness garden. I guess it wasn't the Grand Canyon or anything, but it was certainly a place worth heading to for a long weekend. And so people did. There were not crowds, but every hour or two there was someone.

People are friendly on trails and so, though shy of folks, I still said my friendly "Hi's" as we worked around each other. But I quickly found that every time I said "Hi" and someone greeted me warmly back, a little voice in me complained, "Why didn't you ask them if they had any carrots to spare."

Twice I vowed to ask.

And then I came upon a young man sitting on a large stone next to a tricky split in the trail. He was pouring over a map, looking perplexed. At my approach, he looked up brightly at me and asked "Aye Guv'nor. D'ya 'appen to know which way it is to yon creek." His accent was sort of English.

"Are you from England?" I asked him skeptically.

He grinned impishly. One of his canine teeth was missing. He had bright red hair, flaming red in the sun. I doubt he was more than 17 years old. But he didn't say anything. He just kept grinning what he clearly thought was an impossibly winning grin. This makes him sound less scruffy than he was. He was even scruffier than me!

Spurred by all his... orangeness, I inquired "You wouldn't happen to have any fresh carrots on you?"

"That I might, Guv'nor." He said in his not really, almost certainly fake, English, Scottish? accent. He started rummaging in his pack. He had some absurd things in there; an alarm clock, a snow globe! I was hoping maybe for a couple of cut carrot slices from a baggie if I was super lucky. But no. He pulled out two, maybe slightly wilted, carrots, complete with their rough but full green carrot tops. The carrots were very much the color of his hair. He held them out to me, grinning again.

"My pleasure Guv'nor. Now, do you think left, or do ya think right?"

I considered it. "Well, I think the left fork of the trail looks foul, but feels fair, while the right looks fair but feels..."

"Aye. Like it's going too much in the proper direction. I ken. Sounds a bit like the description of Strider from Lord of the Rings, no?"

"Oh, more than you might know! Well, I've been lingering here a bit too long so I'd best be off. Perhaps I'll see you down in the canyon sometime Guv'nor. Enjoy the carrots!"

I took a gorp break to let him get out ahead. I drank the last of my water too. I wasn't thinking it would take me so long to get down to Pine Creek. Munching on my all too familiar staples I looked over the carrots. Real-life vegetables.

They looked delicious. But I figured I'd better hang on to them for a while. 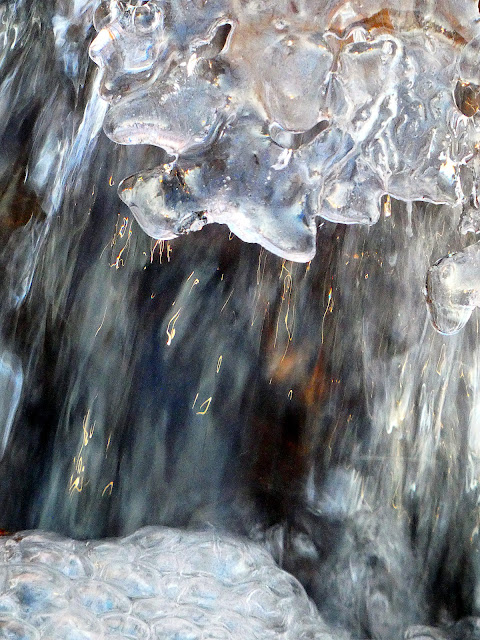