In the course of preparing for Copse Week, and gathering together pictures exclusively of one copse, I accumulated quite a few other pictures I thought it would be nice to show you.

Fifteen of these pictures to be precise.

But not only is there some variety in these pictures, I also learned from Copse Week that I kind of fancy not dumping a bunch of pictures into one post if I don't have to.

It's possible I don't have to.

It turns out that I find things feel better to me sometimes when I can say:

'I have a picture to show you', and then there's just one picture and you can take it or leave it all on its own.

That's more or less how I rolled out my Copse Week pictures, and now that Copse Week is over I have decided to briefly stay the course. So I'm going to roll out my fifteen pictures (or more if I come up with more in the process of rolling them out) one at a time. They'll usually be posted more than once a day. Sometimes they'll have words, occasionally it might just be the picture alone.

When it's all done we'll probably go back to something more normal around here, if we can ever find it, if we ever knew what it was.

It may have been a myth after all.

Anyway, this first picture is of the ice in Shadow Falls. I have taken a fair bit of ice pictures this Winter. It's hard to get these pictures, usually naturally colorless, to turn out. Also it's hard to get near the ice because, as you may have guessed, it can be pretty slippery all around the area.

I was squatted on a little crusty ledge, taking this picture across a small abyss. It's a bigger section of falls than it may appear.

Realistically it really was a safe place, but it still made me nervous. 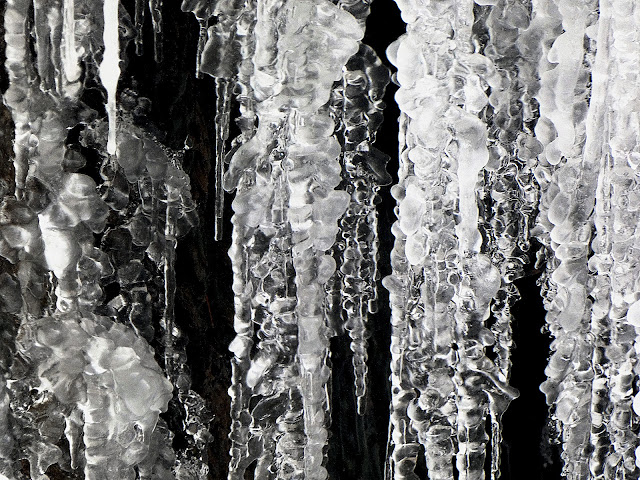