How we deal with active shooters in America

First of all a shout out to all my European, African, Asian, Middle Eastern, Pan Pacific, and Venusian readers out there. Also to the Canadians, the Mexican, the South and the Central Americans. Hola. Buon dia. The current count of my non American readers is...

But things change on a dime on the Internet!

At any moment a new 13 year old, or a chubby cat, or both! will invariably achieve world wide fame. So why wouldn't, in that vein, a person in New South Wales suddenly find clerkmanifesto by freak accident while searching the internet for how we deal with active shooters in America, and cry out joyously: "Oh hello and how do you do mate!" and read several of my blog posts over the next three weeks with amusement and relish before misplacing me in their memory and never visiting again?

I'm just saying anything could happen!

I'm just saying this sort of thing has happened already to me six or seven times!

We have a lot of guns in America. We also have a ton of crazy people who are very, very confused about what they are angry at. And for some reason this produces a great deal of what we call "Active Shooter" situations.

This is a fancy way of saying that Americans occasionally like to go to public, or semi-public spaces, and start shooting everyone they can.

It is not funny!

But it is something we are all forced to deal with in my country.

Many institutions around here like to stick their heads in the sand and hope it won't happen here. But not my library.

Consult our real life library schedule as pictured below, from today: 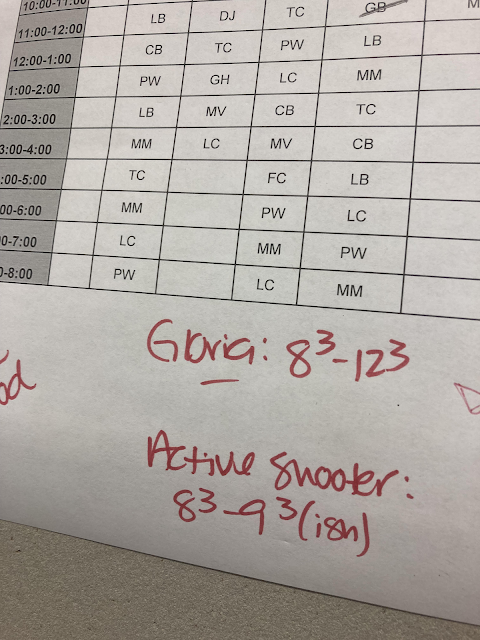 Yes, we schedule our active shooters!

Perhaps you wonder why we would schedule an active shooter. Well, better the devil you know... And may I add that this works just fine for me because then I know when an active shooter will be at the library, and so I just don't go to the library during that time-  Dr. appointment, vacation, bad back, whatever it takes. Simple.

I find that in this way I have reliably and consistently been able to avoid being shot to death at work.

I don't know if my co-workers follow the same practice, but they all still seem to be around, so I'm guessing it's something similar.