Blog of the Last Harbor Library: The question of over staffing

This is the second post in the blog of The Last Harbor Library.

The first post concerned our blogger, Nate, being instructed to write a blog, for the library, by the imperious leader of The Last Harbor Library, Amelia Browning. The post also concerned Nate's speculation as to the reasons for this instruction. The post can be found here.

Explanation for this blog within a blog can be found here.

Last Harbor's blog as a separate, but only barely fleshed out at this time, entity, can be found here.

The Question of Over Staffing

I have received two indications that people have found their way to this newly minted Last Harbor Library Blog. The first was an actual comment on the blog page itself. A patron, or a person who roams very widely and randomly across the Internet, wondered what the books were that are in the background of the picture of our ferocious leader, Amelia Browning (below). 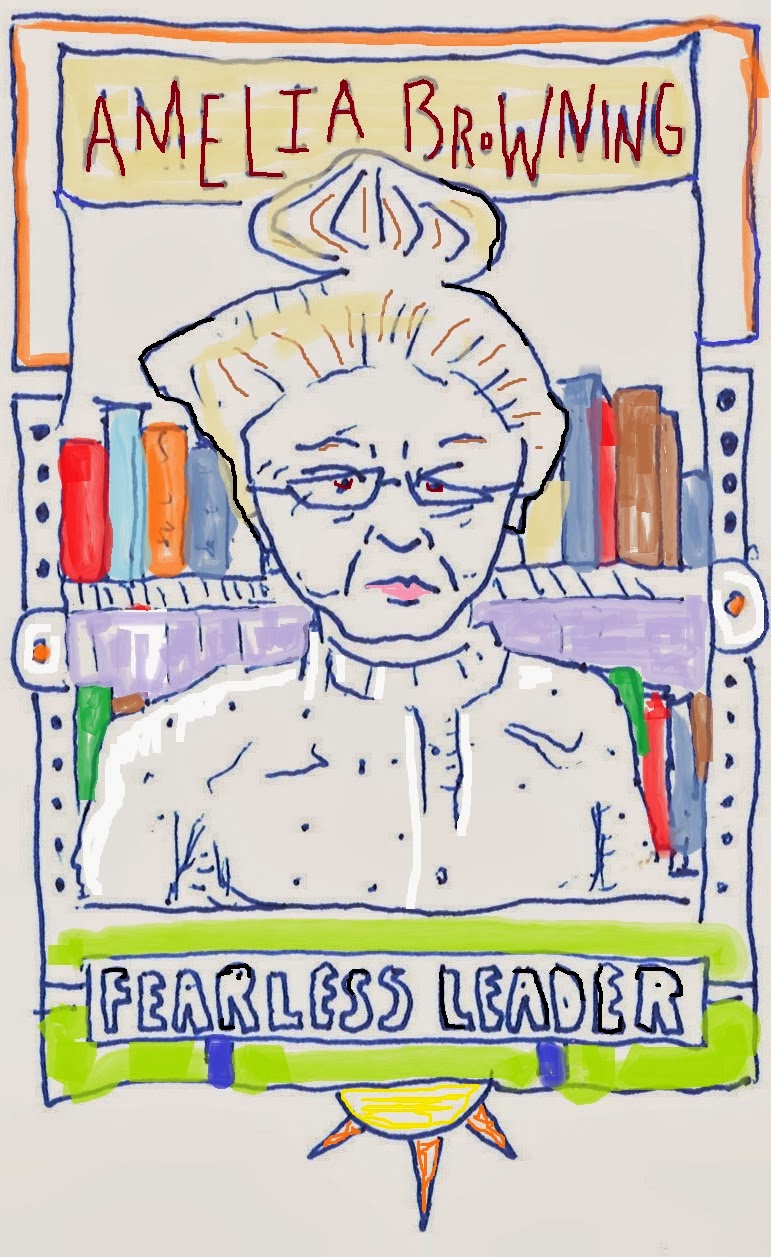 It would be easy for me to glibly say that whatever the books are behind her, they will definitely be Classics. Very Important Classics! However, I took that picture, in our library, and so can find exactly what those books are. It turns out the truth is much, much worse than their being mere classics, and I think will indicate to you how profoundly confused our library is about what anyone in our town, or who visits our town, would ever want to read. Ms. Browning, in that picture, is standing in front of a prodigious shelf of books of Greek Literature. Indeed, it is but a small part of what we have of Greek Literature. I have tried to match up where she is with what we can see over her shoulders. Mostly what we can see is the Godley translations of the Persian Wars books, by Herodotus, who, it turns out, lied like a rug. I think we can also see some books by Hesiod (widely considered to be the first blogger), there might be visible a book that's sort of by Heraclitus (it's largely of things other people said he said. Heraclitus is famous for "No man ever steps in the same river twice." and has been dining out on that quote for millennia), and finally there's a good bit of Hippocrates. I won't insult you by identifying who he is, but I cannot resist mentioning that not every library on the North Shore of Lake Superior carries 2,400 year old books on what to do about "Haemorrhoids".

If you wish for more detail and to peruse specific volumes Ms. Browning will be quite keen to walk you through the collection there. I'm far too busy writing a blog (in the spirit of Hesiod) to help you further than I have already done here.

The second indication that someone found our new blog was more blunt. Kent Carlson, a regular, walked up to the front desk, leaned on it, and said, with a twinkle in his eye "I hear you're over staffed."

This sounded familiar, but it took me a moment to place it. I let that viewpoint of our staffing drop in my very first blog post. "I said that, didn't I? We're over staffed?"

" I guess I should see if it's actually true. Would you care to come with?"

Kent gestured in a rather grand manner for me to lead on, and I headed to a readily accessible staff area. 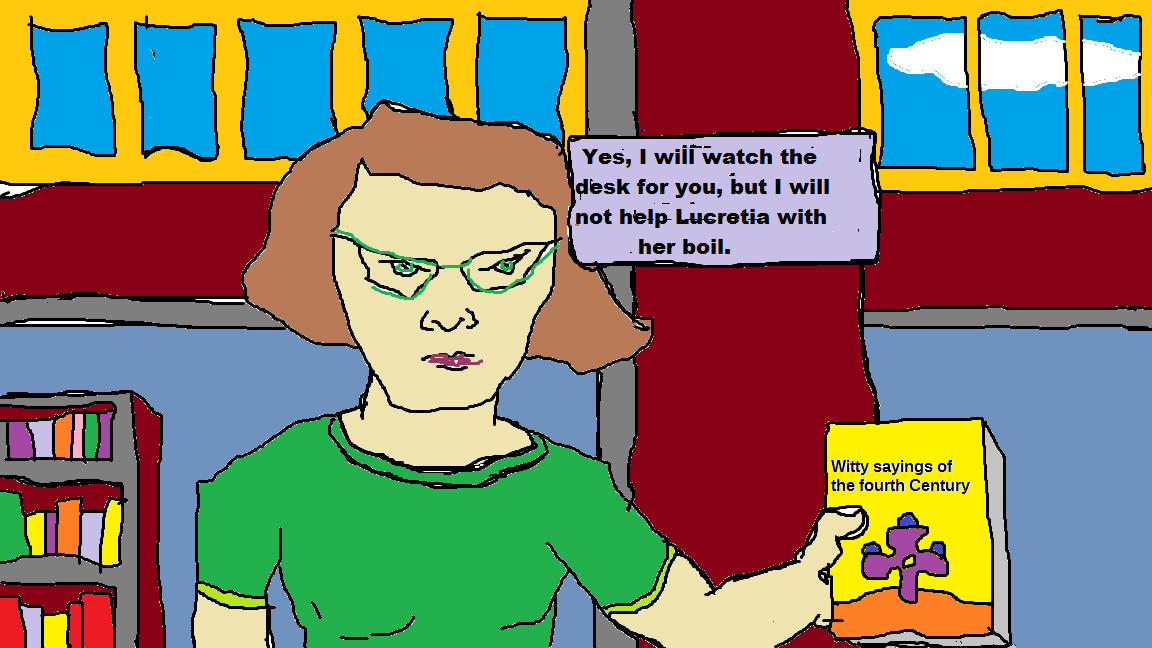 
If you have ever worked with the public you probably have one question right now. "What are you doing taking a wild patron back into the private works of your institution?"

Bah! I say. It's good for you, builds character, lets you see things with a fresh eye. Plus, and here is the big boon: when one has an august patron in tow, one is suddenly on library business. If I wander the library while I'm supposed to be at the front desk I am liable to attract the piercing glares of my colleagues, or, worse, my employer, whose glare can leave scars. With Kent in tow I might get a question or two ("What's up?" or "Is there anything I can help you two with?" To which I could answer "Mr. Carlson was interested in some of our operations."), but I will attract no enmity.

Of course, to tow a patron around they have to be of the right stuff. Kent Carlson is. He is large, bald, older, quiet, wry, and has absolutely nothing to do. I know he has nothing to do because:

1. He spends almost as much time in the library as me.

2. He spends almost as much time in Kelsey's Pub as he does in the library. 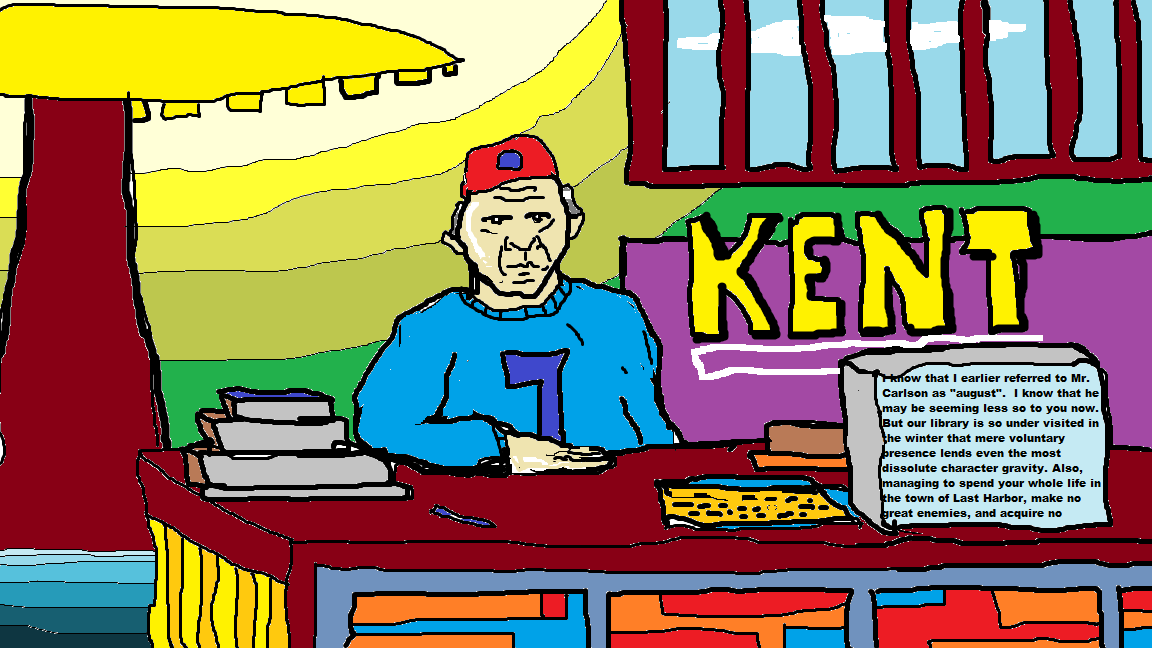 I know that I earlier referred to Mr. Carlson as "august".  I know that he may be seeming less so to you now. But our library is so under visited in the winter that mere voluntary presence lends even the most dissolute character gravity. Also, managing to spend your whole life in the town of Last Harbor, make no great enemies, and acquire no police record, puts you quite high on the august curve. And for human beings it all comes down to the curve. Kent Carlson would be nearly a pauper in New York City, and he would be nearly a King in Madagascar. He would be insignificance itself in Los Angeles, but in the Last Harbor Library, he is august.

And that is the story of how Kent Carlson and myself went on a survey of the staff of the Last Harbor Library. Because it was mid afternoon we saw most of them, and we saw what they were doing. I look forward to telling you who and what that all was, and to answering the question of whether we are over staffed, but it will have to wait until my next post. A blog post should never be too terribly long, and this one is already half way to being so.

-Nate
Posted by Feldenstein Calypso at 6:30 AM