How many words is a picture worth?

It is said that a picture is worth a thousand words.

Maybe. On very special occasions. Or if it's been painted by Caravaggio or something.

This was supposed to be a photo essay about Robins. There is a creek near where I live that I have been visiting a lot to walk along and take pictures around. One day I went there and it was full of Robins. I mean it was teeming with Robins. There were thousands of Robins there and I spent a long while just taking pictures of them. It was amazing. I'd walk a bit up the creek and a hundred Robins would scatter into the air amid a thunderous thrush of wing beats. This happened every ten feet as I went along the way.

I got some good pictures, but maybe not as good as one might think. Even in the crowded flocks Robins keep their distance from not wildly stealthy photographers. And despite their brilliant russet bellies, Robins have a real way of blending in. I even planned a joke when I was photographing. I took a wide picture of the creek in the valley. There were a thousand Robins in the picture, but I knew one wouldn't be able to see them. I was going to feature the picture here with the title:

There Are a Thousand Robins In This Picture.

As you can see I did not put this picture here. It would have used up one of my pictures, depreciating the allotment of any other pictures I might want to show you in this post.

I have cracked the code.

Over the past year I have been including pictures in some of my blog posts here. It's a new thing, or it was for this decidedly literary blog. I enjoyed it. But I soon found that if I showed five pictures of a flower one picture would stand out. And if I showed a picture of a squirrel, a bee, a butterfly, and a flower, one picture would stand out again. However many words the best picture was worth is the number of words all the pictures together were worth.

And that is why today, and more often going forward, I am going to try my very hardest to, when I have pictures to show here, just show one picture.

And so I took a thousand pictures of a thousand Robins. Here is one. I don't know how many words it's worth, or how many Robins it's worth either. But I am pretty sure that including any more pictures will not make it worth any more, and I'd like to keep my average up. 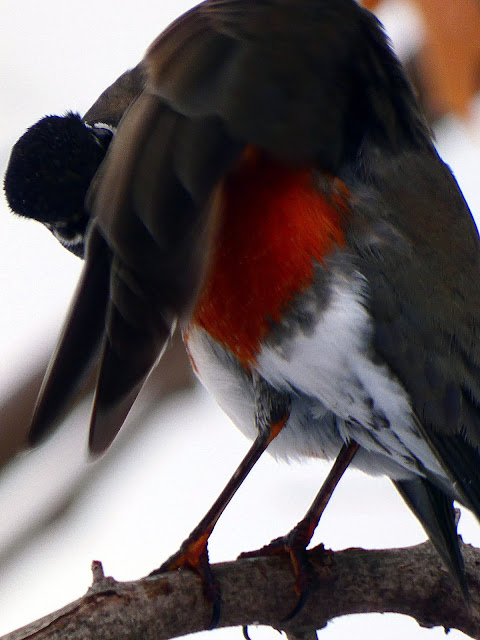