I was recently comparing the pictures I have been taking, close ups of my local stream in the snow and ice, to abstract painting. And it's a nice comparison; these really are the abstract paintings I might like to paint if I could paint like that. Though as a friend of clerkmanifesto kindly pointed out, I am, as it is, in my way, painting them.

Many years ago at one of the art schools I went to I became primarily focused on ceramics. And for a time within that I became obsessed with Raku. Raku is a kind of ceramics glazing process wherein one pulls the ceramic piece out of a kiln while it's still wild hot and the glaze is in flux, throws the glowing object in a metal garbage can full of newspaper, watches it erupt into a tower of flames, and then slams down the garbage can lid over the whole fiery process. At least, that's Raku as it was practiced at that school. The oxygen would get sucked out of the ceramic piece's environment, and strange, magical effects would take place. One could control some of it, but not anywhere near all of it.

It was art on a wing and a prayer. Or crafts. Or whatever. The main thing is that it was compelling to me. I barely even cared about the bowls or bottles I was glazing. It was all about the magical effects that might appear out of my experimental glazes.

While I wouldn't say these photo abstractions of a running brook look like Raku glazing, there are notable commonalities. Metallics, true metallics, especially golds in the case of the photos, are a common effect of both. The whole color scheme can be similar too, with rich reds and umbers, ochres, and lapis lazuli and ultramarine blues. Smokey effects are common to both as well, one maybe because of smoke, and one from the churning and layering of water. But the biggest thing that's shared between the two is a kind of guesswork and out-of-the-oven surprise. I look for certain things in the photos I take, maybe I could call it "blurred clarity", this perhaps being analogous to the glazes I mixed up from recipes in obscure glaze recipe books, and as I reveal them in my computer, and adjust them in my photo editing, they start to either form up into something flat and bland, or they blossom. This all is much like letting the ceramics cool until one could open up the garbage can and see what one has got.

Anyway, all of that is to merely say, one day recently, I got this: 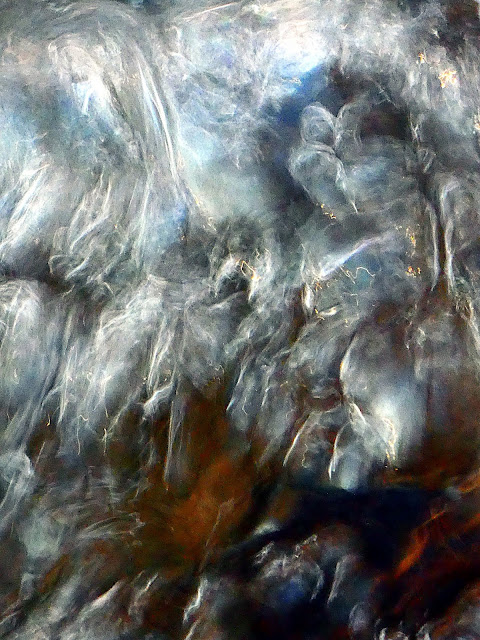