I was walking through the snowy woods by my local creek. This creek runs down over a fall and to the Mississippi River. I was walking away from the river towards my home. The woods were quiet. The creek was quiet. The snow was quiet. Around the bend in front of me came a coyote I know.

This story is called:

Why I Will Never Be a Great Nature Photographer

I met this coyote before on a neighborhood street a couple months ago. I was so absorbed in photographing a squirrel at that time that he almost walked right by me without my even noticing. I took pictures of him walking away. He was in the neighborhood hunting turkeys. He hadn't been successful. He was heading tiredly home.

This time in our meeting we became aware of each other at the same moment. "Oh, you." The coyote said, but not out loud and not meanly. I tried to remain cool, as like one might do when seeing a celebrity one greatly admires. I took a few pictures.

I think if I were a proper wildlife photographer I would have just kept on photographing, doing anything I could for the best shot. If I were that person you maybe wouldn't be reading all these words. You would instead be looking at thrilling picture after thrilling picture, going "Ooooooh! That's amazing. Look at his eyes!"

But for me, decidedly an amateur photographer, after a few hurried pictures of the astonishing wild coyote, I felt a little rude.

We were in a little canyon on a narrow trail. I was headed upstream. The coyote was headed downstream. It would not be respectful to pass too close to each other. How does the coyote get to where I am and I to where the coyote is?

We stood there looking at each other for a moment, being extremely polite in our heads.

It was a lot of fun to be working out a small puzzle with a coyote.

I stepped off the trail and climbed up into the snowy woods a little, giving the coyote the trail, if he would like it.

He did not like the idea of being so close between the stream and me. So with great alacrity he climbed all the way up the side of the hill and passed me along its crest. I watched him go. I even took a few ungainly pictures of him doing it. They were not particularly great.

The best pictures I did not take. I turned them down for a chat and for good manners. 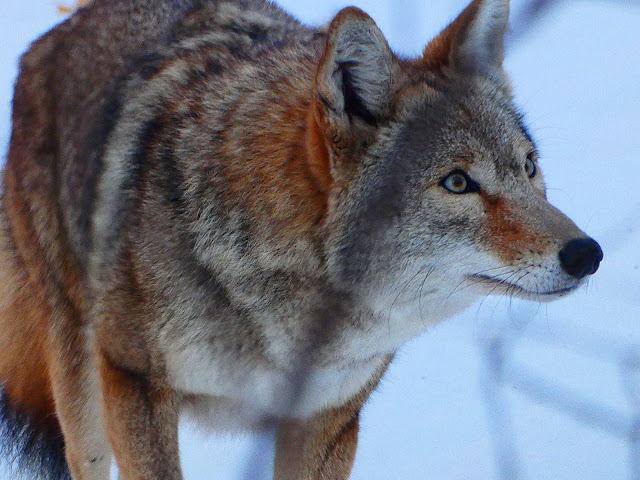