Here is a picture of Picasso's last painting:

This interesting painting, set in France, and possibly depicting tree roots, curiously seems to hearken back to the work of Van Gogh, both in the layered complexity of its color, and in its writhing, oddly simple, yet complex, forms.
I was watching something on the Internet about Picasso, who was one of my favorite artists. It said he lived to be 91 years old and that he painted right into the day of his death. He was extremely prolific.
Interesting.
I thought:
I wonder what his last painting was?
Roughly speaking, Picasso made something roughly like 50,000 works of art.
As to paintings, there were almost 15,000 of them.
That's like five times the number of blogposts I've written! So, a lot.
I learned all this on the Internet.
But when it came to Picasso's last painting the Internet didn't want to tell me what it was.
I occasionally try to alert you to the terrible limits of Internetland. But here it is not just that it doesn't want to tell me what Picasso's last painting was, but also that it wants to tell me, over and over again, in a series of articles repeatedly stolen from each other and dominating the search results, what Picasso's last well known portrait was, painted less than a year before his death.
It looked like this: 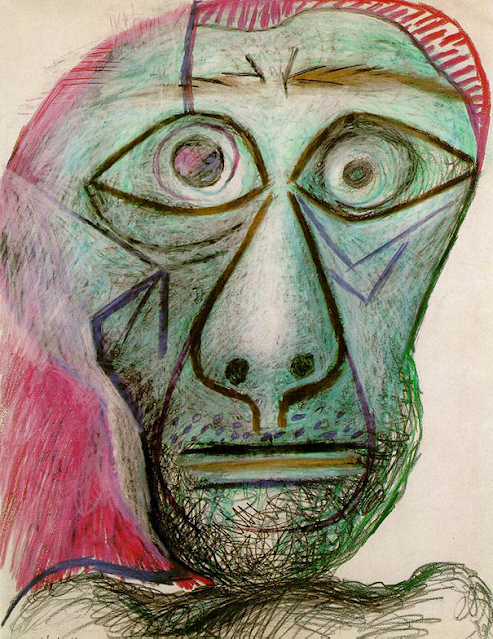 Weirdly good, yet again. That Picasso was really something. I wonder what his last painting was.
Picasso, when he was in his 90's, worked on art 11 or 12 hours a day. It's inspiring, even if he was an asshole.
Despite the fact that Picasso was 90 or 91 when he painted this above painting, there were tons of paintings he painted after it.
Imagine going to a Doctor and saying: I am so concerned about this tingling in my thyroid. Just tell me, do I have cancer?
And the Doctor replies:
Your knee is weirdly swollen, but that swelling is probably not cancer.
As I did the ten minutes of research on the Internet about what Picasso's last painting was I came upon a fascinating, possibly perfect and built for me, book:
The Final Painting: The Last Works of the Great Masters, from Van Eyck to Picasso
by
Patrick De Rynck
This book is coming out in September of 2021.
But before you start getting excited about the absolute triumph of books over the Internet check out this subtitle that casts shame on the publisher of the book: Ludion Publishers, and of course the author Patrick De Rynck, oh, and certainly the publisher Peter Ruyffelaerre, and possibly the whole city of Brussels, where Ludion Publishers is located:
"A selection of the last paintings of 30 of the greatest artists- Not the last painting- as that is often uncertain- but several carefully selected works these artists have made close to the end of their lives."
What kind of monster would do something like this?
I would never call a book writer or publisher a monster.
Hey, wait a second, you interject. If the Internet has nothing to offer on what Picasso's last painting was, how does this blog post start with a beautiful painting of Picasso's last painting?
Oh, that. It's by Van Gogh.
They say it's his last painting.
But who knows?
I mean, except for me. Look for my expansion upon this theme in my next book, coming soon, called:
Trust Nothing.
I think Ludion Publishers might be interested. Belgians love that sort of thing. It's description can read:
An important book about how you should trust absolutely nothing. Except, of course, you have to trust some things, like this book!
It will be my final work.
Except for the ones that come after.
Posted by Feldenstein Calypso at 4:30 AM