The circumnavigation of Saint Minneapolis

The expedition took place on an electric bicycle and ran 17.2 miles long. I brought three cameras on the trip, but I only used two. The journey was experimental in nature, without map, clinging to the Mississippi River and, with some success, to separate bike paths, though it still managed to hug major interstate highways and abysmal road shoulders as well. It took in views of the old downtowns of both of what was known long ago as St. Paul and Minneapolis. These sections of St. Minneapolis, oddly, were once considered two cities. I crossed the Mississippi River twice and the Minnesota River once, the latter of which provided a rare vantage point for both of the downtowns at once.

I traveled down river for many miles before I could be troubled to take any pictures. This happened at Crosby Farm Park, a wild area along the Mississippi River with lakes, swampy ponds, and woods in generous supply.

Here we see the early grasses of Spring coming to life at the edge of Lake Crosby: 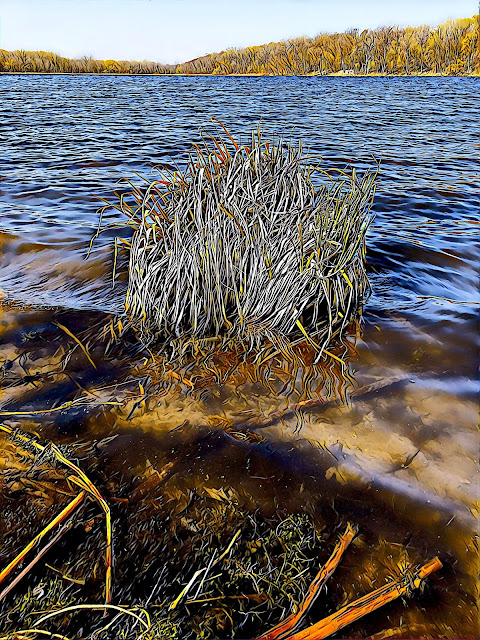 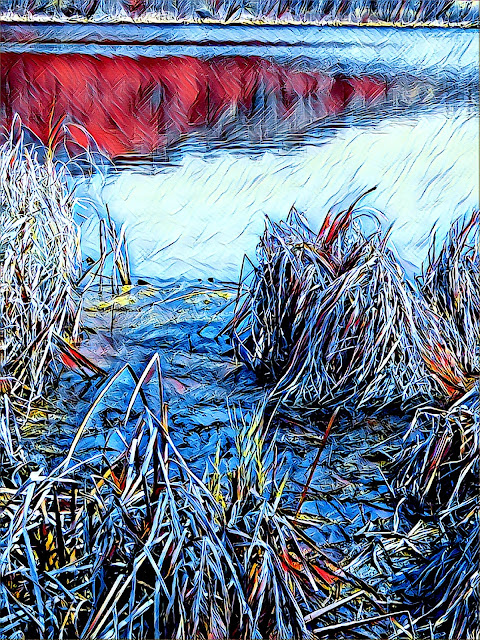 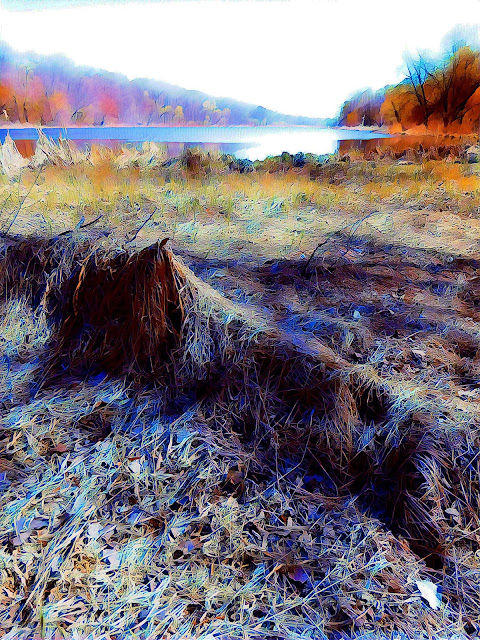 As you can see, my photographic work on this expedition is less naturalistic and more experimental. You will find this only continues, aye even grows stronger in its tendencies, as we forge ahead.

From this first stop we headed back to the woods and admired this celebration of the trees: 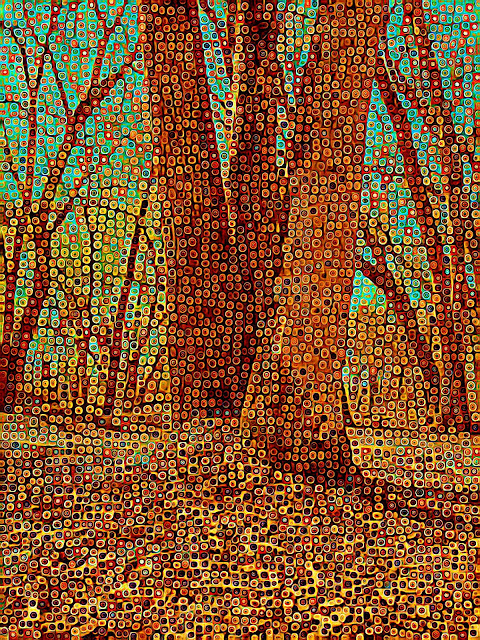 And then I biked along some more swampy sections of colorful Spring ponds and wetlands, stopping for brief forays among the mud and muck to take in the scenery: 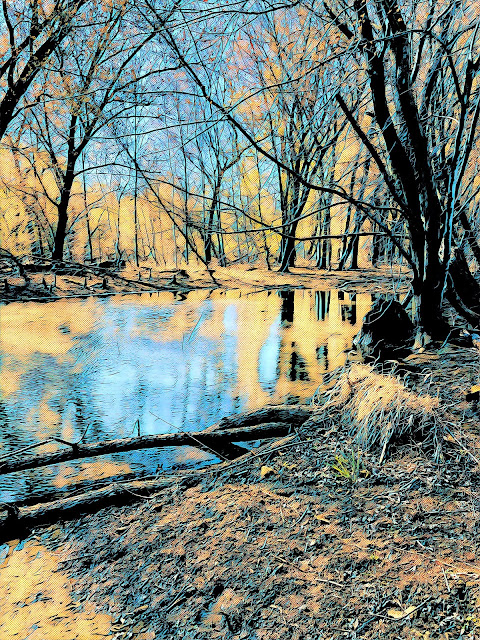 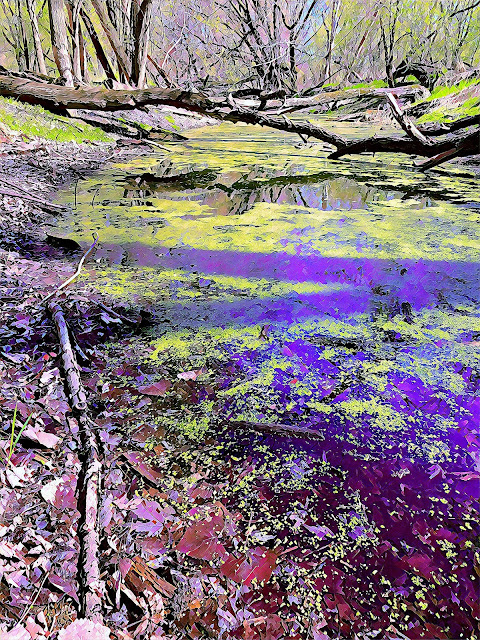 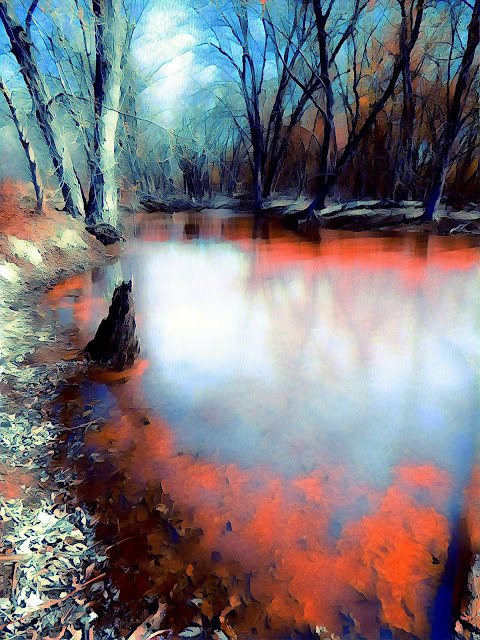 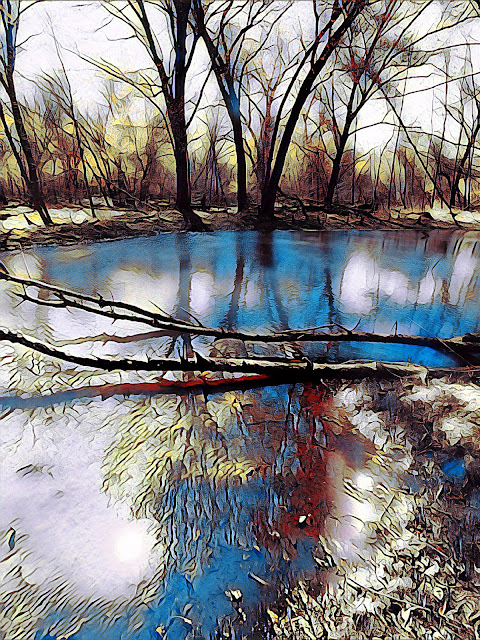 The joys of Crosby Farm Park finally ended at a major Interstate Highway, Highway 35E. To the fortune of my circumnavigation, bike paths took me through a tunnel under the Freeway that wasn't nearly as spooky as pictured here: 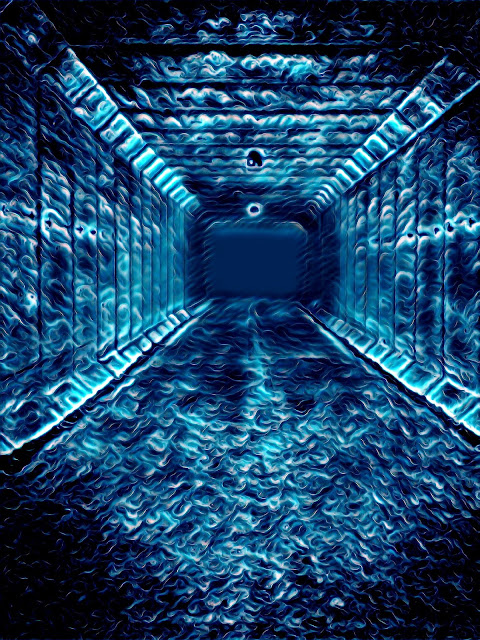 Once across the Highway, a bike path ran along this major bridge of the 35. The middle of the bridge afforded commanding views of St. Paul, from this, the downtown area: 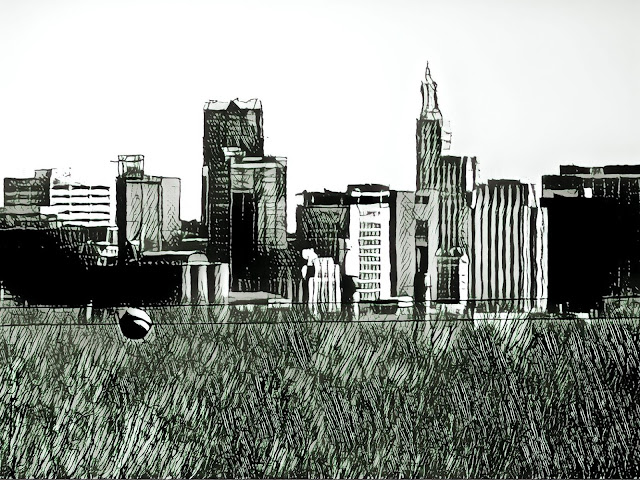 Over to some of the appealing old industrial buildings on the River, and the Cathedral, on the edge of downtown, which is one of the finest examples of historical architecture in the city. 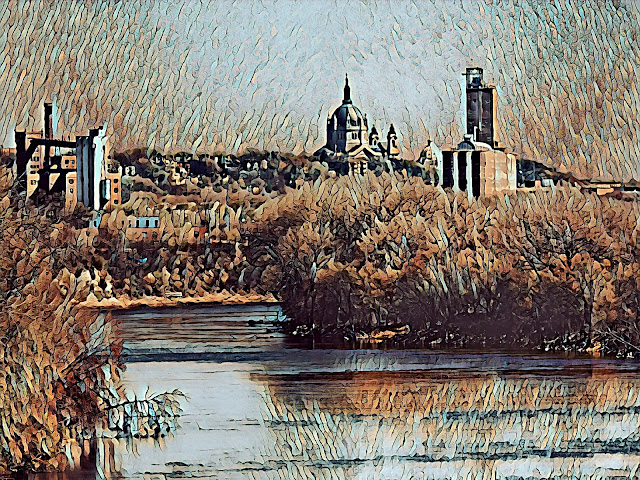 Here is a closer picture of the Cathedral, built at the start of the 1900's. To the far right one can also see the dome of the State Capitol building: 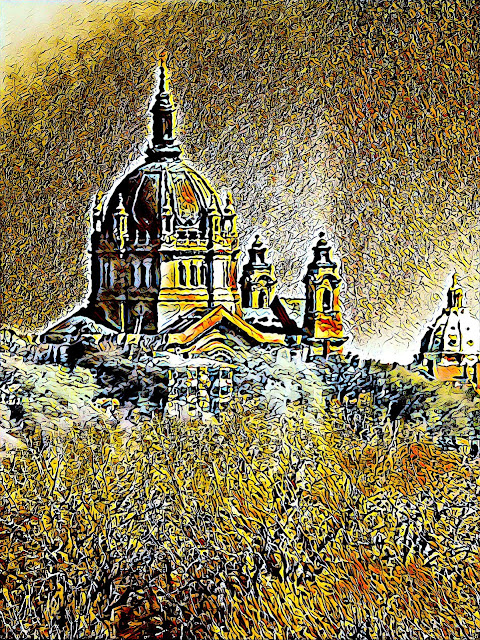 My views in the other direction were far less magnificent, just so you don't think an explorer's life is all wine and roses: 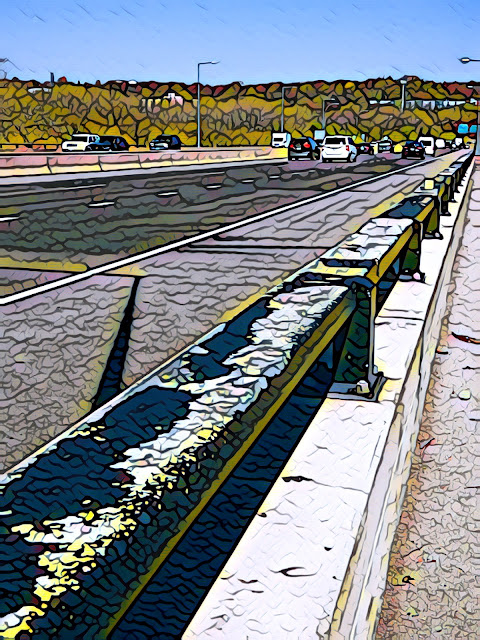 Once over on the south side of the Mississippi  I found the bike path closed for mysterious reasons, and it left me biking along a road shoulder for awhile until that same path finally opened up. This led me to the Mendota Bridge. Curiously the Mendota Bridge has a 4.3 rating on Google. It deserves at least 4.4! It crosses over the Minnesota River just before it joins the Mississippi at Pike Island and Fort Snelling.

Here is a view out of a decorative bit of the bridge to the river valley below: 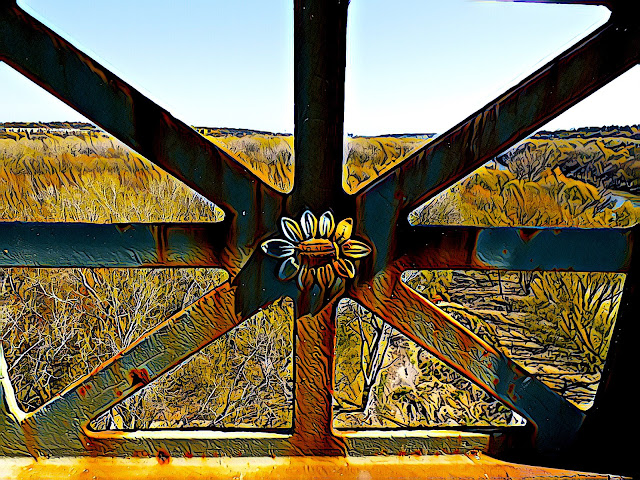 From up here I could see both the St. Paul downtown, as we saw before, but farther away now: 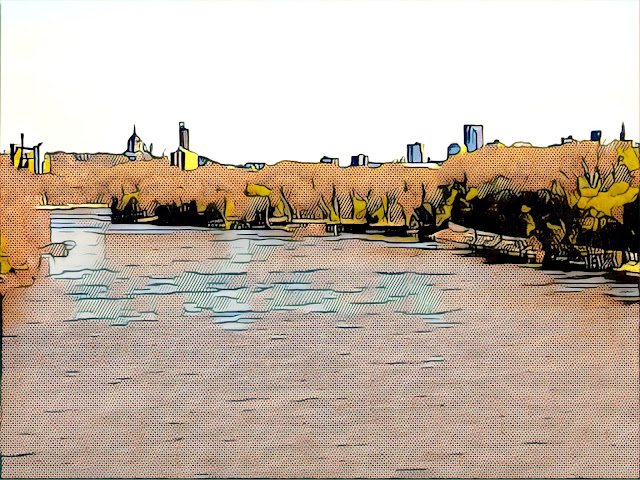 And Minneapolis, shown here with old and historic Fort Snelling in the foreground (where we're heading next!): 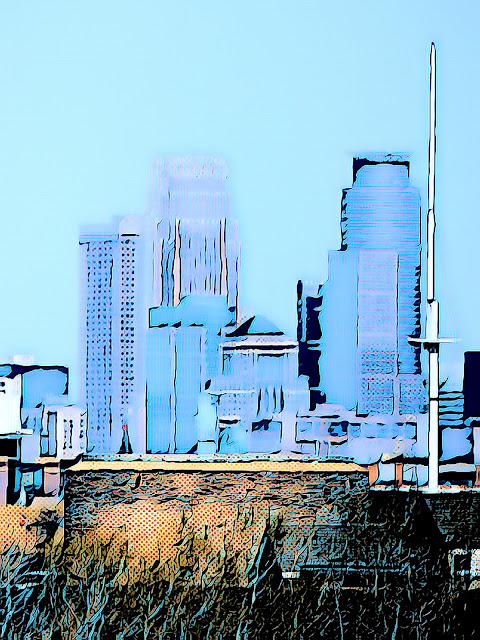 Immediately upon crossing the Mendota Bridge I could head off into Fort Snelling State Park. This includes a major piece of Minnesota history, Fort Snelling, complete with all its nasty legacies, and a fair bit of somewhat wild land in the middle of the city. Here is the main entrance of the Fort, which probably would have been open if not for the Pandemic: 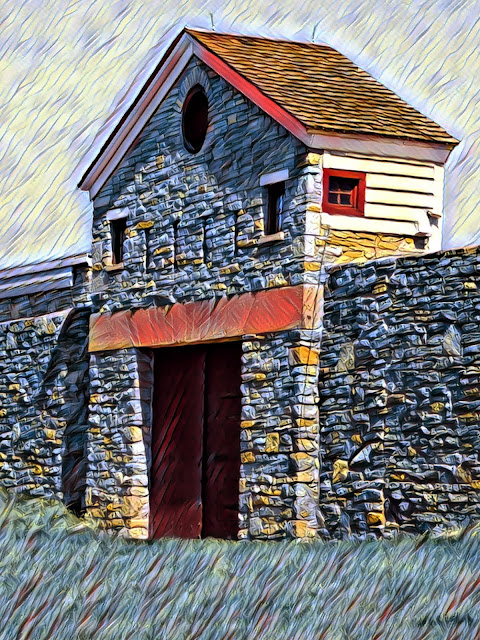 Here is another shot from along the front of the fort: 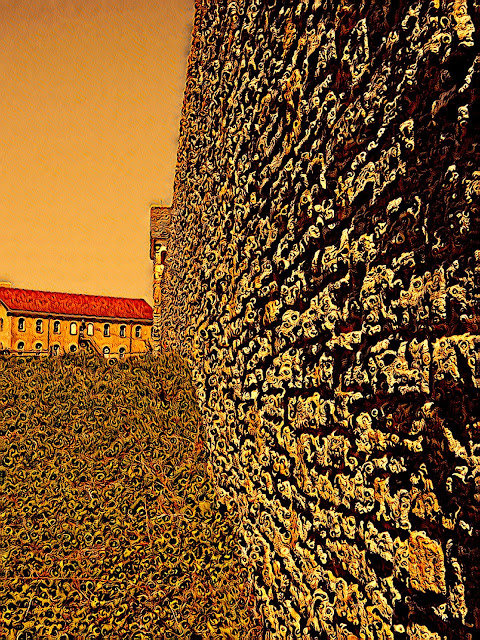 This all is quite well preserved, but when I headed down off the bluff and rode along the base of the fort and its giant walls, it felt more like a giant ruin looming up out of the jungle: 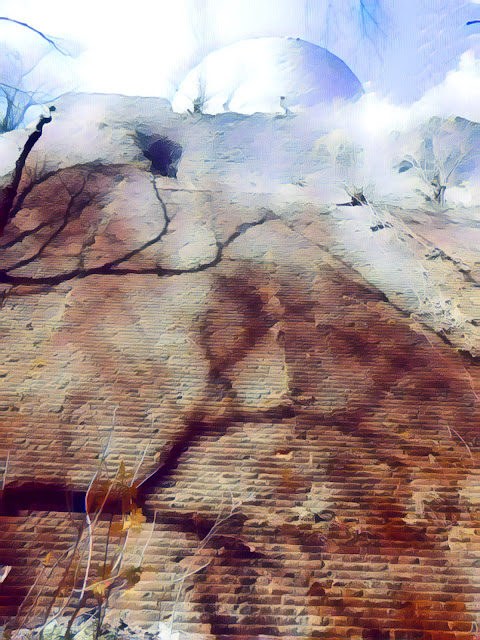 The short round tower way at the top of this giant wall is the same one you can see in the foreground of the picture of the Minneapolis skyline several pictures above.

From here it was all lovely paths towards home through marshy river basin woodlands. Even the path itself could be particularly pretty in this area: 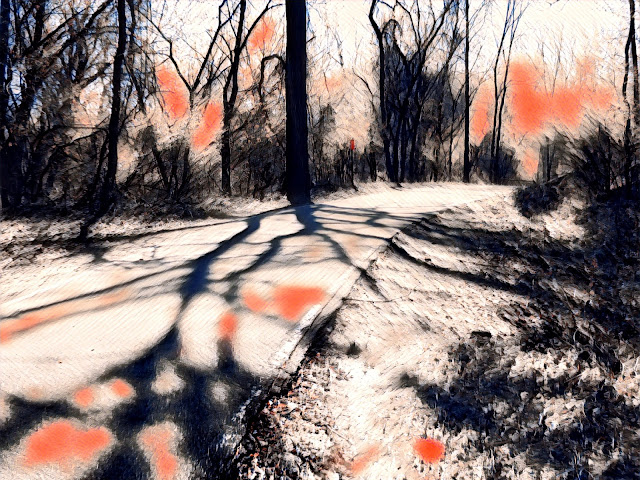 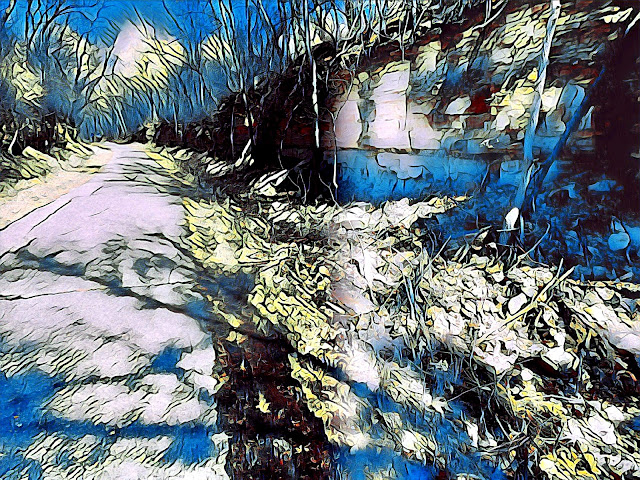 My last pictures of the trip were of some of the dense swampland along the bike route and just back from the Coldwater Spring: 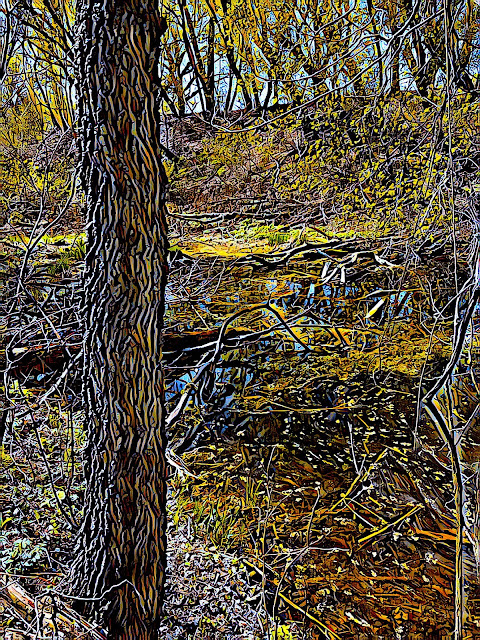 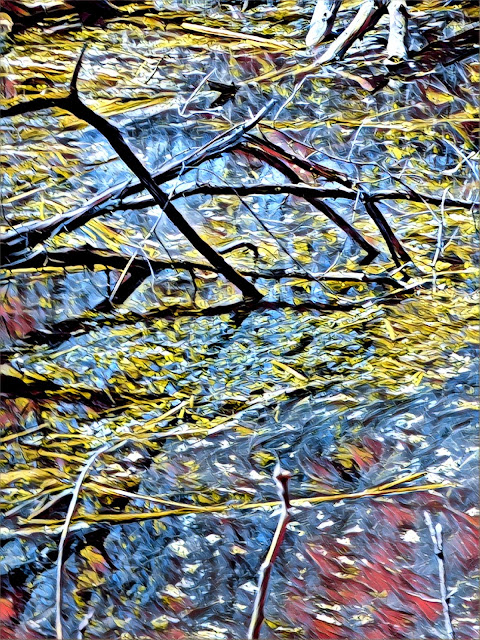 A few miles from here and I was home, my circumnavigation complete.

Thanks for coming along.