Yes. We disappeared into the back wall of a cave in Paradise Canyon.

"You can see how it's just a trick of the light Gov'nor." Said Oliver as we passed through a dark wall of solid stone.

"Er, it's a one way trick of the light?" Oliver suggested.

"Admit you're some sort of rabbit god." I demanded.

"Yes." Oliver replied. "But it's facing the other way." He said this like it was important.

"It looks a lot like the cave we were just in." I said.

"Yes. But it's facing the other way." Clearly I wasn't getting the pertinent point.

So we walked out of the cave and then I got it.

Looking out the mouth of the cave there was a dell. It was still part of the Paradise Canyon, but also apart from it. It had trees in it for one thing, graceful, beautiful trees, and it was riven deeply into the landscape, completely sealed from the rest of the canyon by towering walls of stone on all sides. A small, open river, a brilliant aquamarine, ran through the whole of the valley, lined by the swooping trees, currently full of purple flowers. And then, built up, in rising steps away from the river toward one of the looming stone walls, was something like a village. It didn't seem carved of stone so much as poured from it, a little like the work of Gaudi, with everything curved and naturalistic. Eccentric towers rose from among the widely varying levels of the buildings, sometimes ornamental, sometimes emerging into chimneys with colored smokes pouring out of them, and occasionally defying the heights with a high room looking out over the riven dell.

I smelled candied lemon and vanilla. A bulbous room on top of one of the towers was wrapped round in unequal circular holes and a great flow of something like firework sparks poured out of them at random.

"Don't eat anything while you're here, but you can drink whatever." Oliver said. 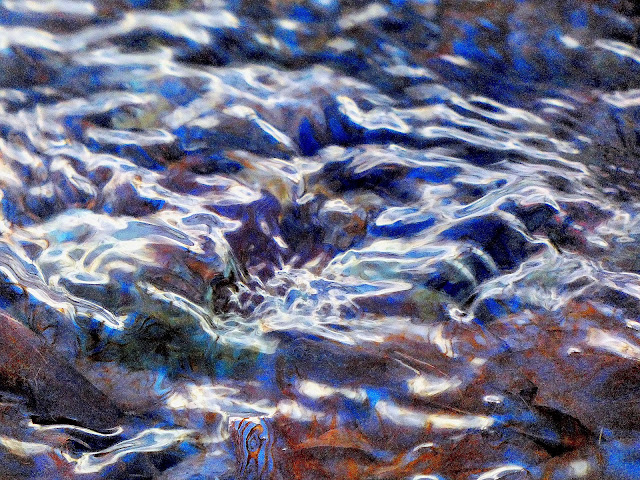