Chapter 20: There and Back Again

Chapter 20: There and Back Again

As we stood above, at the mouth of a cave, admiring the secret dell of Paradise Canyon, three people of indeterminate gender, wearing something like gowns made out of patterned clouds fashioned into a puffy garment (they looked comfortable!) climbed up undulating stone stairs towards us. We climbed down to meet them.

"Welcoom." One of them said with a strong, twisty accent I did not recognize, and handed Oliver a lightly steaming, comically oversized goblet. He took a sip. Then he handed it over to me with two hands. I took a sip too. It tasted like carrots and mushrooms, and then butterscotch and something more vanilla than vanilla and then

We were standing on a rough, Paradise Canyon mesa overlooking the great unpopulated wilderness vista and, down below, the Bluestone River. My hands were empty. Oliver and I were alone. The secret valley was gone. All the magic was gone.

"What happened?" I asked.

Oliver put a finger to his lips, thinking. "It was a hallucination?" He ventured halfheartedly.

I cocked my head at him and side-eyed him.

"No." He said. "And there was someone I wanted you to talk to there." He considered it again. "I know! Take out the meteor."

I took it out. It was in my pocket. I tried to hand it to him.

"No. Don't." He said sharply. "Hold it in this hand and put your palm face up." Oliver said lifting my free hand up. "Now place the meteor over your palm."

"Close your eyes, and put the meteorite on your palm."

"Slowly curl your fingers over it while carefully picturing the village in the dell. Remember the smell of carrots and thyme?"

"No." I answered. "It smelled like lemon and vanilla."

"Yes, good! Though odd." Oliver added. "What color was the smoke in the chimneys?"

I had a strange, momentary feeling just under my ribs, almost like my stomach rumbling or a hand passing through. "Uh." I answered, distracted. "Color? Orange. And pink, piglet pink. Blue. A burnt yellow, like ochre, honey?"

"Can you see the three people we met?"

"Good." Oliver said. "Open your hand back up, then your eyes."

I opened my eyes.

I was in a beautiful wood on a windy summer day. Winnie the Pooh and Piglet were standing in front of me. Pooh said "Hello." and Piglet kind of ducked back behind him shyly. Eeyore circled round himself about 15 feet back of them and then toppled over.

"Close your eyes!" Oliver called out with so much urgency that I did. He put his hand over my eyes. "Okay." He said. "So, open your hand first, then your eyes, but picture the valley from before."

I did. I pictured the valley and the chimneys and the little river as well as I could. I thought I could smell the lemon candy again.

And we were back! 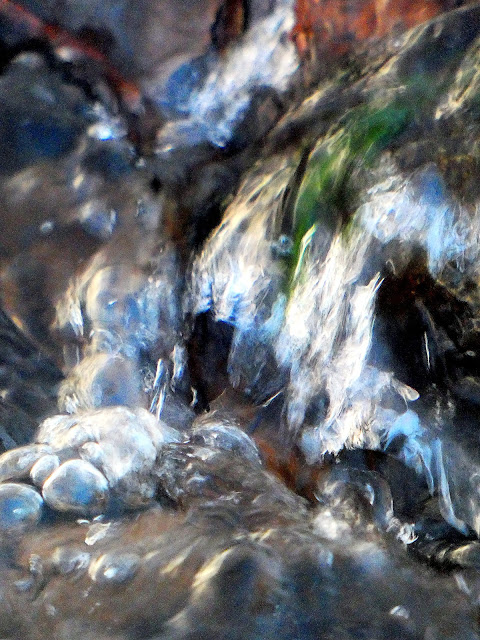