This conundrum has never been foiled.

I won't talk about the breadth of Paradise Canyon here in this chapter, or the mighty height of its great cascade of walls. And I don't mean to discuss now the monumental size of the National Park, one of the country's largest, and the hundreds of miles it took to cross its boundaries from north to south. Also there is the matter of the complexity of the canyon that is not my subject here, where the Paradise Canyon exists on so many levels and in such astonishing folds and breaks and windings and hidden corners that each mile contains another ten hidden miles within.

No. As befits the story of a through-hike, I want to discuss just how long Paradise Canyon is!

Oliver and I hiked through the entire length of Paradise Canyon National Park. It was amazing and long and beautiful and long and challenging and long. And then finally we came to the border of the park and so in theory were done. But the Agua Fria Trail took truck with none of that and continued on just as it was. The trail followed the same valley of the Bluestone River for a long, long time, and it  was pretty much the same deep canyon of the park- deep and colorful, massive and complicated.

It turned out that the whole "National Park" thing is just a trick, the perfidy of the labels of Man and the quiet con of his maps meant to entice and repel. I might even venture to say that the next 100 or so miles upstream of the Paradise Canyon National Park were prettier, more varied and more astounding even, than that which resided inside the fabled park itself. But Oliver and I probably wouldn't have ventured to say anything of the sort back then because we were just so tired of it all. There was so much endless navigating and rock climbing and sun and hiking up and down and down and up and up and down forever that we had, to some extent, had it.

In short, we continued through miles and miles more of Paradise Canyon, but when a person is hiking thousands of miles they become prey sometimes to what I like to call tunnel hiking. This affliction could come on one at any time and turn a complex, beautiful nature journey into a forced march, a pounding, bleary-eyed trudge of one foot in front of the other forever. Oliver was less prey to it than I, but looking back now I can see why I had one of my worst episodes of tunnel hiking during this particular phase of my Agua Fria journey.

The first reason was that due to what I had found in the future paradise of Paradise Canyon I now knew that ending my hike early, a tantalizing balm I had long been soothing myself with, was now only possible at the expense of a terrible disaster for the whole world. The second was that I knew I was in my final few weeks with Oliver, and it turned out that not only did I really really like Oliver, I was also profoundly scared of being all alone again.

For the first of these problems there really wasn't much help, but Oliver eventually came through on the second, sort of. It was on the day where we had come to Paul's Ferry, which was the second bridge over the Bluestone River in hundreds of miles, and marked an important point in our trail. Here we would cross the river and actually, finally, climb all of the way out of the canyon, heading out to the high elevation woods and ultimately to the town of Kohlrabi.

We were lunching by the river, which, for all our long traveling along it, was a surprisingly rare event because our hiking was nearly always working along two or three levels of cliffs above it. Our gorp was running dangerously low, but we had some good water and a few precious lembas left, which we had decided to finish off then and there as a way to say goodbye to the canyon and river.

During that lunch Oliver turned to me and said "You know, I would continue on with you all the way if I could." He paused. "But I can't."

"Why not?" I asked trying not to be sullen.

"I can feel it already." Said Oliver. "I can't be too far away from my own land. I'll just fade out."

"Kohlrabi for sure? Maybe a few nights after." He said, referring to our next town.

"Someone else is coming after me, you know." Oliver added. "To, you know, help."

I looked up at him.

"What side is that, exactly?" I asked. 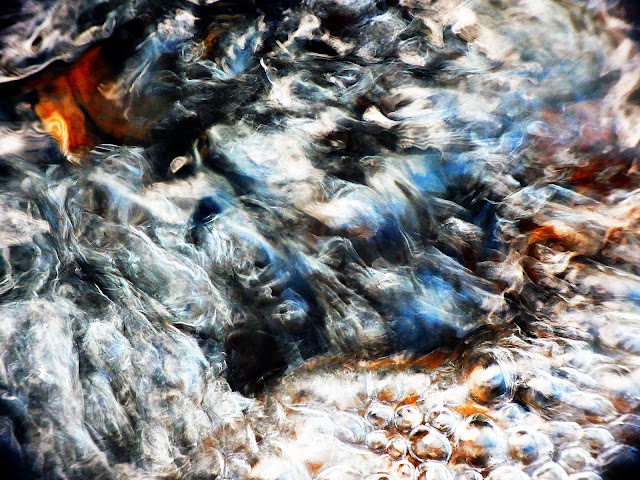