I was out on the Mississippi River and I caught a picture of a little yellow accented bird. It was nothing really to get such a picture. I saw him hopping along some of the logs and detritus pushed in by the Spring runoff to line the shore. He was a stout little fellow, bouncing along from place to place, but brightly colored, so I thought he would make a nice photo subject.

I removed my camera lens and turned on my camera. I aimed at the wee figure to get him in my sights. He was quite small, so I zoomed in. As I did so he hopped away.

But he only went a little bit away. Now he was fetchingly posed on a bare branch, backdropped by the mighty river. I swept my camera over, got him beautifully in sight, and as I depressed the shutter button he flew away.

But he only moved a few yards down the shore!!! So I followed along, aiming and taking blurry pictures and curious accidental shots of mundane and muddy scenes he just vacated.

Anyway, to make a long story short, after 40 minutes I finally got this shot.

It's not bad, but some of the pictures I didn't get were gorgeous. 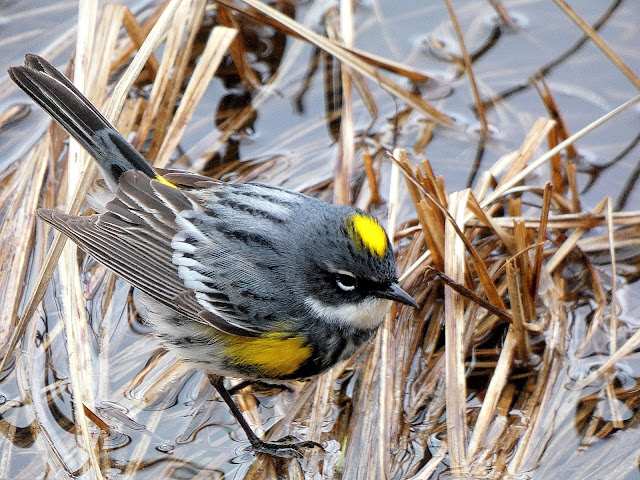