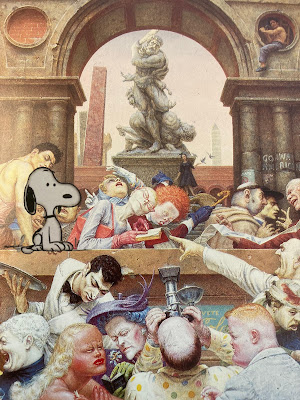 I am surprisingly good at remaining neutral at the front desk of my library. People have a great many different interests and beliefs, and though I am sure many of them will cause the end of all life as we know it on the planet, I am also sure that keeping an open and unthreatening library environment will make that all less likely to happen.

Nevertheless, I will carefully speak up for my beliefs in the right circumstance. A good example of this is when there is dissension between parents and their children, especially when I feel the children need support.

Yesterday I was helping a young lad track down two volumes of The Complete Peanuts that had been on hold for him, but that he just missed his pick-up time for. This search was a long process, and the mother was impatient with it. I don't think she was concerned that it was taking up too much of my time, or maybe even hers, she was just upset that her son was so interested in these Peanut books. She said he needed to read more chapter books, he need to read text because his brain wouldn't develop if he read cartoons.

"I just have to step in here," I said. "The Peanuts are great literature. They are Shakespearean. I'm not saying anything against chapter books, but your son is reading one of the great sagas of our times."

I don't think the woman was really convinced.

But then, I wasn't speaking for her.