In a campsite in the darkest forest I have ever been in, with a disturbing spider god a dozen feet away, I slept.

I mean, I slept after awhile.

But seeing as I didn't catch anything crawling over me in my tent I gradually cocooned more and more deeply into my sleep. Before I knew it I awoke to an actual splinter of sun that had found its way to my tent, lighting it up. I heard birds. It wasn't raining! I stepped outside and found, to my surprise, that Charlotte had gone without a trace. The hammock was as if it had never been. There wasn't a footprint or clawprint or bit of yarn left behind. I didn't know what to make of it.

So I lit a small fire. I ate a pop tart from a box of cherry frosted that I had acquired in town. I used the privy with considerable consternation and lots of cleaning it off first. There were no spiders there but an unusual number of slugs! I packed up. And I headed out to the trail.

I hadn't gone more than a hundred feet when I came to a massive spider web strung across the trail. It was beautiful and looked fresh, but there was no spider in it. I preferred that, though with some trepidation- if I didn't see the spider then how could I know where the spider was? But at that moment that was not my main consideration. The web was my main consideration, all on its own. It was like so many of the globe spider webs I had thrashed down and through as I made my way among the Goldenflower Woods, except for one key difference; Woven into the center of the web was a single word:

"Well that's nice." I said to no one in particular.

Then I spent 15 minutes lurching about in the bog and muck and tangle of the woods to get round it without knocking it down. It just didn't seem right to mess with literature. 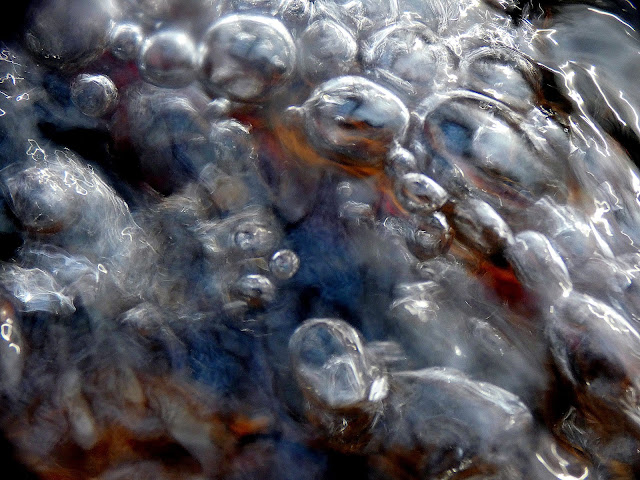