There are an unholy number of diagrams on the Internet these days attempting to illustrate the shift in American Politics. These are usually represented by a left-right continuum with little figures standing on that line and showing how radically a person keeping the same political orientation will have shifted in relation to other positions on that line because those other people have changed so dramatically. 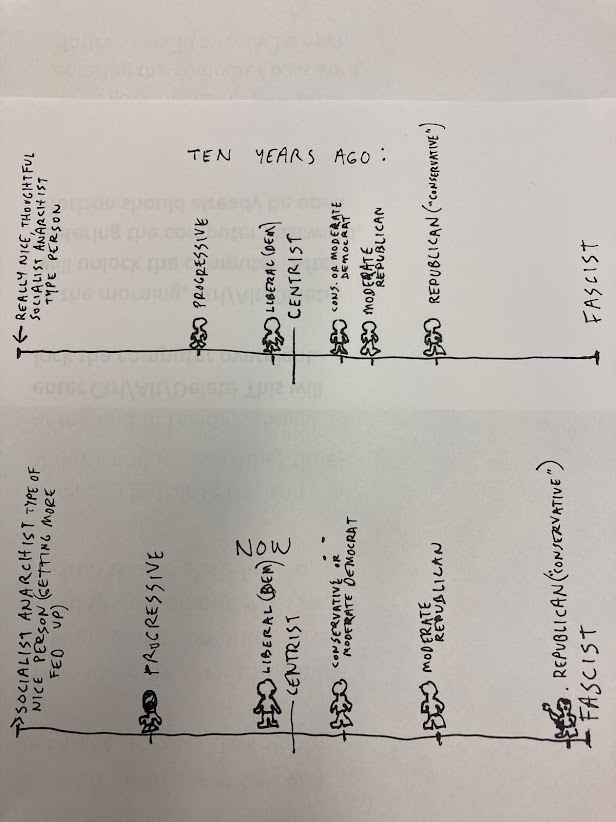 Ooops!
I made it too complicated and messed it up.
But maybe you get the idea? A liberal, moving not at all in their political beliefs for ten years, is now miles from a standard Republican, and much farther from a "moderate" Republican as well. A progressive, who has moved a bit left in a decade, is now miles from a mainstream Republican who has moved vastly and terrifyingly right.
And it's this last issue I wanted illustrate through a longtime library patron I will call "Ottmar".
Many libraries, for a hundred years, have had a patron like Ottmar. Our Ottmar has been around for about 15 years now. I'm pretty sure his tenure has been interrupted a couple times for institutionalization and pandemics. But as a whole he is generally here, on our computers, printing copiously and attempting to share his work with anyone he can.
And what is this work?
Aye, there's the rub.
It is a stew of anti-Semitic rambling, racism, crazed persecution complex paranoia, and "The lizard people are taking over" hysteria. Ten years ago he was the troubled, schizophrenic man that any library has to deal with. We hoped that he would find some help and maybe make his way to at least some faction of civilized society.
Nope.
Instead a gigantic chunk of civilized society has made its way to him.
I don't think he feels any less lonely though.