I started clerkmanifesto as a free and open gift to the Internet. I followed the rules. I wrote content every single day for almost eight years. I shared it, as it was recommended, and as I was supposed to, in all the social media I could find and in every place that would allow me to. But there were ever fewer and fewer places on the Internet to share. Indeed it has become easier to share poisonous huckster scams on the Internet than it is to share free gifts.

Maybe people only value the things that it costs them to get. Alas.

And so in this way one day my blog here stumbled upon pure gold.

I hurt my finger.

There was interest among my 37 subscribers in seeing a picture of the dark bruise under my pointer fingernail. For years in the creation of my blog I would simply have just shown it. But my lack of popularity had darkened me. And in that darkness I saw, hung on a tree, glowing, so to speak, a forbidden fruit.

I would not show a picture of my fingernail wound unless we could get clerkmanifesto up to ONE MILLION subscribers.

I would make the world pay to see the fruits of my creativity!

My number of subscribers soared up, in a fever of interest, to 37 subscribers!

This being close enough to a million I relented and showed my finger. 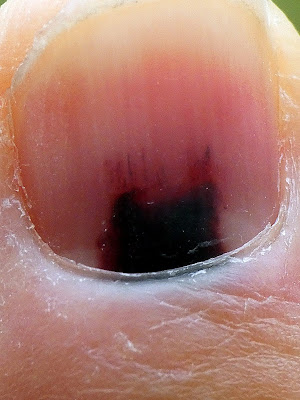 All of this happened five weeks ago.

And now clerkmanifesto readers, our numbers vastly inflated from 37 to an amazing number I long thought I'd never see, 37, are interested in seeing how this fingernail bruise has progressed.

But there is no going back once one has tasted the sweet fruit of Capitalism, clickbait, paywalls, fame, manipulation, marketing, and profit.

After all those years of simply showering my gifts on an uncaring and uninterested Internet, I withheld. And only then did they come to me. Only then did I taste the fame and glory I felt was mine!

Well too much is never enough!

I do have a picture of my wound from now, five weeks later.

But I have paywalled it!

If that's how you want to play it Internet, then that's the way we'll play it!

I will not show the new picture of my advancing fingernail injury until my demands are met!

No one will see the state of my finger wound without paying the king's ransom I now set.

views of this post before I show my latest finger update!

Jesus, it's almost scary how fast this ransom thing works!

Here you go then: 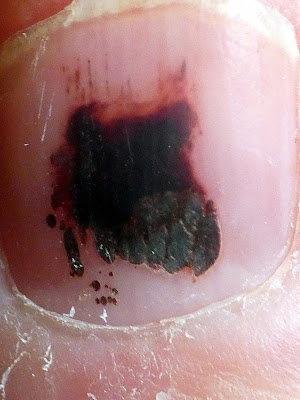