Another theory of art

I have long held a loose theory of art that says that the invention of a new fundamental idea or approach in any field of art unleashes a kind of profound power and energy. This makes not just the work of one artist especially notable or expressive, but it can spread to an entire field, a whole movement of artists. It can create out of thin air more great artists at a single time than in any normal period.

My go to examples for this have always been Impressionism and the rock music of the sixties. Impressionism, for instance, made a kind of basic break with how people saw the world, painting and how paintings were made. It produced a sudden wealth of outsized artists; Monet, Cezanne, Cassatt, Renoir, Pissarro, etc., and then, breaking into the ideas further, releasing wave after wave of energy, Van Gogh, Gauguin, and on into the Fauves.

The interesting thing is that this quality plays out in much smaller ways. Individual artists will readily find that when they come upon some small new approach, or a new field to work in, their greatest expressive impact comes first, and though it can be refined, and occasionally improved by that refinement, it is often dulled as well.

On perhaps the smallest level one can see that play out regularly here at clerkmanifesto. As I figured out a new way of working up my city pictures I quickly hit my peak, yesterday, with an assortment of pictures I was pleased with.

Today, I tried to push on further, but found much of the energy dissipated.

But I do have this one picture where I took the original approach to an extreme. It didn't work out that well, but almost.

From here, no doubt, I'll move on to the next thing, looking for my next fix. 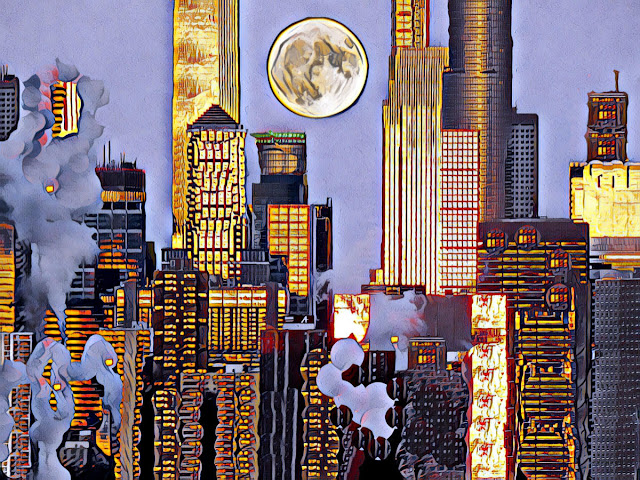