We had worked our way around into Porcupine Creek. The trail was relatively friendly down to it. First it climbed along up the broken cliffsides, moving straight away from the river, and then it wound down in careful switchbacks to a wide open section of the creek- a quiet valley where the stream meandered unfettered for awhile.  Below this point the creek tumbled over a 50 foot fall and disappeared into a narrow crevasse we could now happily avoid.

We decided to camp here because it was one of the most friendly spots we had seen in a week of hiking. Paradise Canyon's vistas were astonishing all along, the scenery breathtaking, and the landscape barren, wild, oversized and astonishing. But it gave everything a sense of awed formality, like we were endlessly in a Cathedral, and no matter our religion it would still be appropriate to be ever respectful.

Porcupine Creek, spread out as it was where we were, gave protection and oasis to a richer plant life than we had been seeing, from actual grasses to thin stands of cottonwood trees. It was a pretty place, lovely really, open enough for some sun and sky, but contained to a modest size by low, broken blue cliffs, so that we were not overwhelmed and enthralled by miraculous vistas. We were so taken with the spot that it was the earliest we had made camp in ages- with the sun still high in the sky, and with the energy for once to do more than just put up the tent and eat food out of bags.

Oliver went to his beloved foraging, and we had a tasty stew that night- something I didn't know I missed so much. There were tiny kernels of corn in it! I used obsessive care in picking out my one stream photo for the day, and my journal entry was a long one, covering many things I could not be bothered to discuss from the past week. Like the evening when a fox wandered into our camp, so closely and with such presence that I thought it would speak to us. It did not. It merely sniffed around cautiously. I marked that it seemed to show a special interest in Oliver, but if there was any ancient enmity there I sure couldn't tell it from Oliver, who grinned with delight at our visitor.

We had also seen, over the past week, regular large flocks of dark birds flying overhead. Oliver always had us stop and rest for a bit when we spotted them. I had just been noting these in my journal entry, sitting on a stone over Porcupine Creek, when the biggest flock of all, low enough now that I could hear the roaring of their hard beating wings, began to fly over. At first I didn't realize just how enormous this particular flock was, but as it passed overhead it thickened until it seemed to darken the sky, a cloud of gray birds briefly covering our valley completely, from one canyon wall to the other.

And then they were gone.

"Did you see that?" I asked Oliver when he came back a while later with a wet cloth bag stuffed with weird and mysterious weeds and roots.

"Do you know what they were?"

"Passenger Pigeons." He said. "It's not great, but probably inevitable. At least I know where we are now Guv', and," He raised his eyebrows over a twinkle in his eyes. "What we can do about it."

I sighed. It was going to be one of these inscrutable conversations. Okay. "So." I said. "Where are we?"

I looked around and shrugged. "I guess it looks as much like the mid 1800's as anything else." I said.

The next morning we found our way out of the canyon almost as easily as the way in, though there was a short, nerve-wracking section we had to climb. At one point, up on the mesas again, Oliver was unusually keen to leave the main trail for something more like an animal track that led up to the base of the next set of cliffs of the Canyon. "I'd really like to get up there." He said pointing some vague, shadowy area out ahead.

"Have you been here before?" I asked with a sudden intuition, even though he had said before he hadn't.

He scrunched his face like there wasn't a clear answer. "Sort of?" He said.

The animal track disappeared into nothing, as they so often do, and now we were wayfinding across rocky, open country. But now I was equally interested because the cliffs we were angling up towards appeared to be riddled with caves. "Maybe we should leave our packs and explore up there." I suggested. I have always been fascinated by caves.

"Let's get closer." Oliver said. "There might be a way through and we'll wish we didn't have to go back for them.

So we struggled up to a worn ledge below the caves keeping our packs on. Most of these caves were really just shallow indents in the cliff. There were no exciting pictograph or ruins here. At best it might be a good place to get out of the worst of a rain, but it wasn't raining.

Then we found something deeper. Oliver was leading as if he was looking for something. "C'mon." He said, and I followed him in.

It wasn't that much deeper. It was a great, scooped out hollow in the cliff, with dark, smooth walls, and full of crumbled stone and boulders at the bottom. The back of the cave was maybe 75 feet in, and we climbed the boulders up to reach the back wall of the cave. The view out of the frame of the cave to the canyon below was especially inspiring, but Oliver was completely absorbed in some private search of his own.  "I'm almost sure this is it." He muttered, feeling along the rock face of the back of the cave.

"Can we take off our packs?" I asked. This lark didn't seem to be going anywhere and the boulder hopping was tricky with 50 pounds on my back.

"Hang with me there just a titch m.... Ahh!" He cried. And I looked up as he was feeling along the back wall of the cave.

His hand disappeared into the stone. 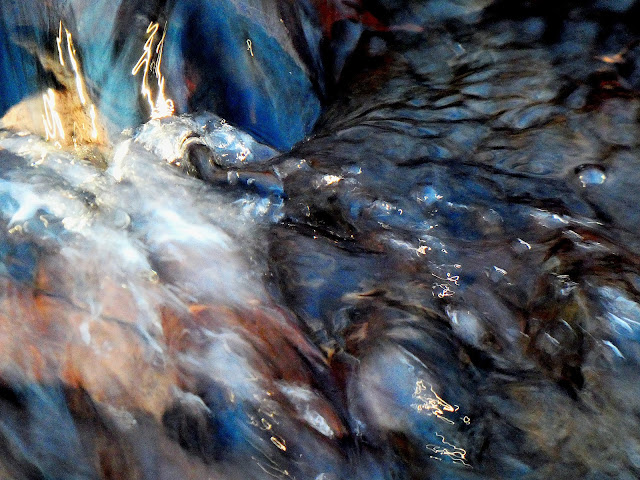